During the IFAT Entsorga exhibition 2012, several refuse collecting vehicles (RCV) have been introduced that use CleANopen networks to communicate between body controller and the RC-specific control units. In particular, lifter, measuring, and bin identification units are equipped with CleANopen interfaces. C-Trace, Moba, Terberg, and other suppliers exhibited their CleANopen products at the Munich fairground. 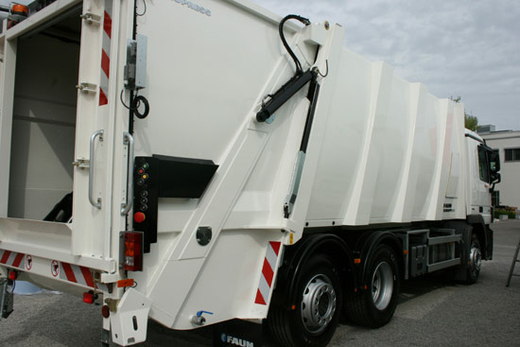 “IT SEEMS THAT CiA 422 OR CleANopen IS GOING TO FLY,” said Andreas Schmidt from Moba Mobile Automation (Germany). Since many years, the company offers a broad range of CleANopen (CiA 422) compatible devices including on-board computers and measuring units for weight and volume. C-Trace (Germany) also offering identification units and weighing equipment with CiA 422 interfaces integrates other CleANopen devices without additional fees. “We would appreciate, if CiA will provide CleANopen conformance and interoperability tests,” said Andreas Holler from C-Trace. Moba likes the idea of by CiA tested and certified products, too. Both companies hope that certified interfaces would reduce the integration effort.
At the IFAT Entsorga, the Ifeu Institute (Germany) demonstrated the version 4.0 of its Imelo body controller featuring CiA 422 connectivity for lifter units. Terberg (Netherlands) presented at the open-air area its lifter units with CleANopen interfaces. RosRoca’s Olympus rear loader RCVs uses them as well as Dennis-Eagle in its garbage trucks. The British Dennis-Eagle belongs to the Spanish RosRoca group, which has also acquired HN-Schoerling. 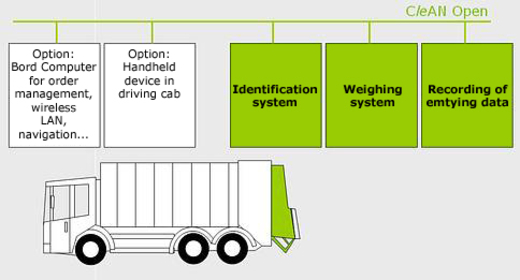 Faun introduced a broad range of RCV using the company’s CleANopen-based control system. The control platform has been adopted in the Variopress truck, which comes with completely re-worked body container and a fraction-optimized compaction unit. All container variants on the packer-plate vehicles are equipped the modular system for hydraulics and electrics in the front framework. The self-developed control system for the rear loaders are designed to fulfill complex requirements of waste collection vehicles. The host computer is installed in the radio seating inside the driver’s cabin. In the event of malfunctions, the controller pinpoints them. Up to 500 messages can be created and saved. The Variopress body can be mounted on all common 2- and 4-axle chassis. It deploys not only in the domestic waste disposal sector, but for mixed materials for recycling as well. The same control system is used also in the Powerpress, Rotopress, Frontpress, and Sidepress bodies.
The benefits of the CleANopen approach are not limited to improvements of the embedded control system. It also allows feeding fleet management systems with additional information. For example, the Mawis system by Moba supports the tracking of RCVs and the performed operations (e.g. kind and weight of the garbage). C-Trace offers also a track-and-trace system. The c-route system can be installed in vehicles with and without lifters (e.g. bag emptying or container distributing trucks). It can also include a driver navigation display, which is linked to a Windows-based onboard computer. The company’s c-fleet waste management system transfers the route data to the vehicle by means of GPRS. The CleANopen compliant products comprise also a unit recording the emptying information. It registers all emptying with GPS information.
The CiA 422 CANopen application profile (version 2.0) for RCVs has been submitted for European standardization. It has been accepted and is now under editorial review. The related CANopen Special Interest Group (SIG) within the CiA continues to enhance the CleANopen functionality. The predecessor (version 1.0) has been published as DIN report 141 in 2005.
Other CleANopen device suppliers are Mobil Elektronik (Germany) and Veridat (Germany). Mobil Elektronik develops and manufactures in close cooperation with customers lifter units for rear-, front-, and side-loaders. In addition, the company offers vehicle gateways and identification systems. Modules enabling remote maintenance services can enhance Veridat’s identification system. Ifm electronic provides for its on-board computers a CiA 422 software support.

CiA has updated the CiA 413 series of CANopen truck gateways. Part 2 and part 3 are available as ver...

Vehicle tracker product line with CAN

For less than 16-kg e-bikes

CAN FD device for programming and testing