Asyril (Switzerland) has developed a micro-robot with delta kinematics for micro-technology applications. With this kinematic structure a small platform with a gripper is moved in 3D space with parallelograms. Three motors from Maxon (Switzerland) drive the parallelograms. The robot's moving mass is therefore very low, making top acceleration and velocity possible. 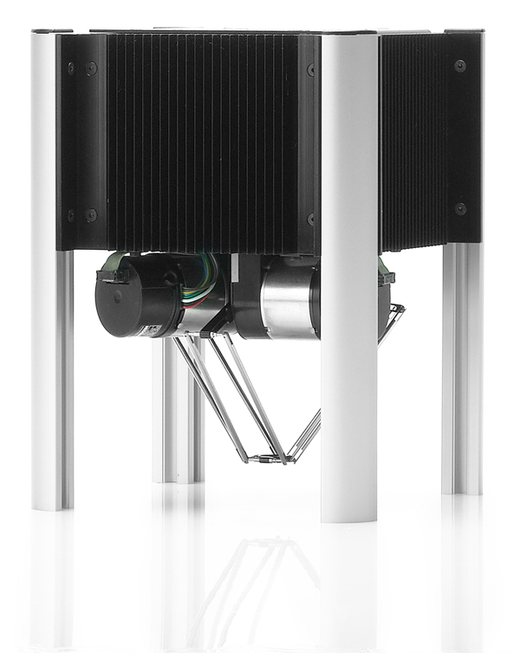 THE POCKETDELTA ROBOT USES Maxon EC-i motors with 40-mm diameter and 50-W nominal output. With an internal, multi-pole rotor, these motors typically feature low-time constants, making them highly dynamic and giving them high-torque density. The EPOS2 Module 36/2 positioning controller drives these motors. This device is placed into the card slots of a motherboard developed specifically for small robots with up to four drives.

An ARM11 processor with on-chip CAN modules is used as host controller. This processor also sits on the motherboard and communicates with the EPOS2 via the CAN network. Other EPOS2 controllers, e.g. for feed systems or transfer axes, or even other CANopen devices, could be connected to the host controller providing NMT master functionality.

Highly dynamic robots such as the PocketDelta that can reach accelerations of 5 g and velocities of 2 m/s place high requirements on the drive controls. The dynamic equations of such systems are normally nonlinear and also coupled between individual drives. To reduce tracking errors to as few µm as possible at high acceleration and velocities, in addition to a specially designed feedback controller, a feed forward controller that calculates the entire robot's dynamic equations is applied.

The EPOS2 Module 36/2 controllers are operated in "Current Mode". In addition to motion planning, which must be synchronous for all drives, the host controller also calculates the control algorithms and the dynamic equations. The host controller then transmits the resulting current set values to EPOS2 via the CANopen network. The actual motor positions are captured with high-resolution encoders and sent to the host controller by PDOs from the EPOS2. This way, position and velocity control is closed through the CAN network (Figure 4). With an optimized definition of PDOs featuring as short a data length as possible and the various drive controllers divided onto two CAN networks, cycle-times of well under 1 ms can be achieved for control purposes.

(The full article “CANopen for small drives” by Dr. Marcel Honegger (Maxon) has been published in CAN Newsletter 1/2012)

Applied Motion Products (USA) providing since 2007 CANopen drives has completed its portfolio by the...

The iPos 3602MX motion controller by Technosoft (Germany) embeds a PLC and provides a CANopen interf...

Over hill, over dale: The six-legged robot does wander everywhere

Over rough and smooth: Lauron, the six-legged robot, developed by researchers at the FZI (Germany), ...