The winner of the 24 Hours of Le Mans 2012 is Audi. Two teams driving the R18 e-tron Quattro equipped with a hybrid diesel engine drove the longest distances. The car’s electronic used CAN-connectable ECUs by Bosch Motorsport. 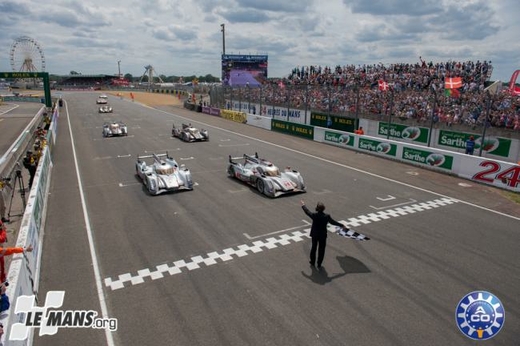 THE R18 E-TRON QUATTRO OF André Lotterer, Marcel Fässler, and Benoît Tréluyer took the checkered flag. This team secured Audi Sport’s 11th victory at the 24 Hours of Le Mans. The German carmaker filled all three places on the winner’s podium. In the second place was the other hybrid-powered R18, and in the third place was a conventionally diesel-powered R18 ultra. All these sport cars were equipped with powertrain electronics from Bosch. Dr. Wolfgang Ullrich (Head of Audi Motorsport) commented the double victory: "This is no doubt a historic victory for Audi. We were the first to win Le Mans with a direct-injection turbo gasoline engine and the first to be successful with a diesel engine. It’s a great result that Audi is now the first brand to have achieved victory with a hybrid vehicle.”

Diesel engines are the winner
The R18 e-tron quattro is the first hybrid sport car with Bosch technology. The German car supplier provided the complete common-rail diesel injection system. This includes the high-pressure pump, injectors, and high-pressure rail. In addition, Bosch Motorsport is supplying its customized MS 24 engine control unit, the starter, generator, wiring harness, and telemetry system. During the race, the latter transmits all relevant vehicle data from the car to the pit by radio and WLAN. The Audi racing cars also feature an electrically assisted rack and pinion steering system. Audi Sport developed it in collaboration with Bosch Motorsport and ZF Lenksysteme. For the Audi R18 e-tron quattro, Bosch Motorsport supplied the motor-generator unit (MGU). It was developed especially for use in the Audi R18 e-tron quattro. Installed on the front axle and featuring integrated power electronics, the MGU electrically feeds the energy recuperated during braking into a flywheel. During acceleration, the MGU drives the race car’s front axle via two electric motors. Each electric motor delivers 75 kW.

Since 2006, diesel-powered racing cars won the overall victory at Le Mans. “The teams fully exploited the main benefits of diesel technology, which are high torque and low consumption,” says Dr. Markus Heyn, president of the Bosch Diesel Systems division. “And many drivers are also reaping the benefits of diesel every day, in normal driving conditions.” Motor sport is used by Audi to pioneer new technology: The brand with the four ring's combined in its R18 e-tron Quattro a TDI (turbo diesel injection) with a hybrid system. This is the next generation of four-wheel drives, with which Audi combines the advantages of the proven quattro drive with the potential of electro-mobility. To this end one vehicle axle is powered conventionally, the second by electric motors. "Audi has always consciously selected championships and categories in racing that have a close relationship to production and therefore have technical relevance for the Audi customers," explains Head of Audi Motorsport Dr. Wolfgang Ullrich. On the R18 e-tron quattro kinetic, energy is recovered on the front axle during the braking phase. It is fed as electric into a flywheel accumulator before being retrieved under acceleration again above a speed of 120 km/h. During this procedure only the front axle is integrated. The V6 TDI engine producing 375 kW (510 hp) continues to transmit its power to the rear wheels. Both systems complement each other to create the drive principle e-tron quattro. The project e-tron quattro for motorsport started in February 2010. Only 18 months passed from the initial conceptual ideas to the first test. "This is a relatively short cycle for a technology that has never been tested in motorsport and which still doesn't even exist in production," stresses Dr. Martin Mühlmeier, Head of Technology at Audi Sport. When the company designed the R18 TDI for Le Mans 2011, the technicians already had the future electrification in the back of their minds. It was not foreseeable that the new, smaller power plants would be subject to further limitations by the regulations after their first season. The carmaker developed the Audi R18 ultra in parallel to the Audi R18 e-tron quattro – because Audi took a two-pronged approach this year in the 24 Hours of Le Mans and in the newly created FIA World Endurance Championship (WEC) – the 2012 model year Audi R18 is built with and without hybrid drive. The trick: the base of both cars is completely identical, which is why the additional logistical effort is kept limited for Audi Sport and the race team. "The TDI engine invented by Audi is still the most efficient drive in the world," stated Dr. Wolfgang Ullrich. "We are convinced that the TDI has even more potential. This is why Audi not only supports the hybrid in motorsport as it does in production, but in parallel also the further development of the conventional drive."

Innovation in transmission area
The R18 e-tron quattro's twin brother more than lives up to its model name 'R18 ultra': it is the lightest Le Mans prototype that Audi Sport has ever built. To compensate for the additional weight of the hybrid system the subject of lightweight design and construction was the focus throughout development of the 2011 Le Mans race winning R18 TDI. In addition to the many detail optimizations there is also a genuine innovation in the transmission area: a new gearbox with a carbon-fiber composite housing was developed for the R18 – a premiere for endurance racing. "The new R18 ultra is a distinct evolution of last year's Le Mans race winning car," summarizes Head of Audi Motorsport Dr. Wolfgang Ullrich. "Our drivers' impressions were very positive from the first moment. Without the weight optimized R18 ultra we would have not been capable of realizing the R18 e-tron Quattro, which is absolutely identical with the exception of the hybrid system."
The system integrated into the front axle is comprised of two drive shafts, Bosch’s MGU including planetary gears, an electronic flywheel accumulator alongside the driver, an insulation monitoring unit for high voltage safety and the control system. The process of energy recuperation is explained relatively easily, the technical implementation is, in contrast, extremely challenging. The recuperation of energy occurs during braking. In the process, the wheels drive the MGU. The MGU accelerates electrically a carbon-fiber flywheel, which runs in a high-vacuum. After the corner is taken and the driver accelerates again the system delivers the energy to the front axle. The regulations allow 500 kJ of energy to be transferred to the front wheels between two braking phases. The planetary gears adapt the transmission ratio during acceleration and braking. The two independently powered axles on the R18 e-tron quattro are synchronized exclusively via electronic control strategies. This control occurs automatically without driver intervention. The entire charging process (recuperation) is controlled by two parameters: the deceleration of the car, meaning the braking process, and subject to the accumulator’s state of charge. The energy emission process (boost) is defined by the minimum speed of 120 km/h stipulated by the regulations, the race strategy selected, the throttle pedal movement and acceleration of the car.

Test-system for network characteristics of ECUs

Goepel Electronic (Germany) has developed the Tessy series of test-systems dedicated for automotive ...

Isabellenhuette (Germany) provides since several years CAN current sensors for the electric kinetic ...

885 km from Stanford to Las Vegas

Nicknamed “Jack“, the Audi A7 demonstrates that series production technology is able to ...