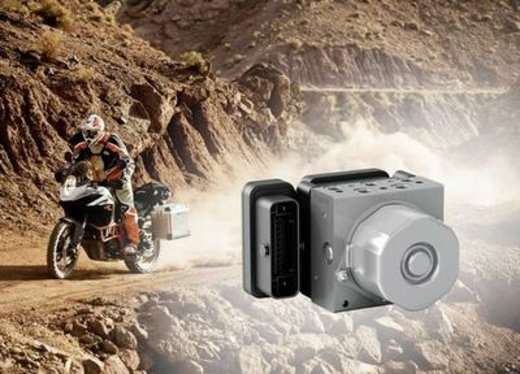 THE CAN-BASED OFF-ROAD CONTROL SYSTEM is designed for sand or loose surfaces far from paved roads. It can be integrated into the ABS plus and ABS enhanced versions of the introduced systems. The slip thresholds and other parameters have been adjusted to give bikers optimum braking performance in rough terrain as well. The result of this fine-tuning is that the ABS takes effect later. It allows more slip between tires and riding surface than an ABS designed for road use. The rear wheel can dig in to the track surface, improving braking performance on rough terrain. Moreover, the front-wheel control allows stronger deceleration, without any negative effect on vehicle stability. Motorcycle manufacturers can adapt the off-road control to allow riders to deliberately block the rear wheel and perform the typical maneuvers seen in off-road racing, such as drifting or pulling the rear wheel around in tight corners.
Engineers can add an off-road version or a traction control system to the diverse Generation 9 variants. In 2013, both functions will feature in the 1190 Adventure and 1190 Adventure R by KTM. “The many variants of the Generation 9 motorcycle ABS and its additional functions allows us to satisfy the requirements of all motorcycle makers and their customers,” says Fevzi Yildirim, general manager for motorcycle safety systems at Bosch.
Combining the ABS with the traction control, it can prevent the rear wheel from spinning during acceleration, and counteract front-wheel lift. Fevzi Yildirim adds: “The Bosch traction control provides support on pavement and now, for the first time, in rough terrain as well.” The traction control can be integrated into all two-channel systems of the Generation 9.
If the motorcycle manufacturer adds manufacturer's lean-angle sensor to the system, the traction control will also control the maximum permissible drive power in bends. If this sensor is installed, the safety system checks the machine’s dynamic state 100 times a second, and computes the tilting and lean angle as well as vertical acceleration. The traction control can even be adapted to motocross machines for dirt racing.
Since Bosch launched the world’s first electronically controlled ABS for passenger cars in 1978, the number of fatalities in car crashes has dropped considerably. In 1986, it was followed by the TCS (traction control system) based on the ABS platform, and in 1995 by the ESP (electronic stability program).
The first motorcycle ABS went into series production in 1994. It was followed in 2010 by the world’s smallest ABS for motorcycles developed by engineers in Japan. “ABS significantly increases safety when riding a motorcycle, since 47 percent of motorcycle accidents are caused by riders braking wrongly or too hesitantly,” says Dr. Wolfgang Hiller, the regional president of Bosch Chassis Systems Control in Japan.

ESP for light vehicles and vans

Bosch (Germany) is starting series production of the ESP plus (Electronic Stability Program). With t...

Electronic stability control (ESC) is a computerized technology that improves the safety of a vehicl...

Ever more often, motorcycles are coming off the assembly line with additional high-performance funct...