Solar power does not have a long shelf life

Storing power is complicated and expensive, but often, especially far away from the regular power grids there is no way around large batteries for grid-independent electricity consumers. It would make more sense to use the electricity when it is generated. This becomes possible with the help of a smart energy management system. 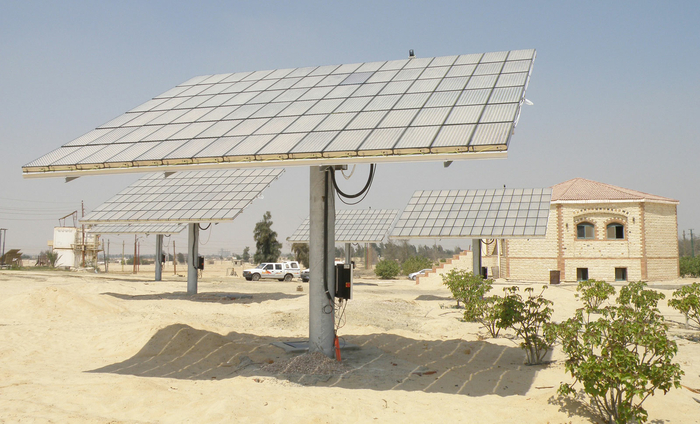 FOR FRUITS, CEREALS, AND LEGUMINOUS PLANTS such as oranges, wheat, beans and olives to grow in hot and dry climates, they must be irrigated regularly. And often the water used comes from deep wells. In Egypt, many farmers currently use diesel generators to water their fields. A model project in Upper Egypt, in Wadi El Natrun, shows that other methods are possible. Here, a photovoltaic stand-alone system takes care of irrigating a wheat field. Concentrator photovoltaic system (CPV) modules – which, due to their higher degree of effectiveness and their particular construction, require far less space than traditional PV modules – supply the energy, while Fresnel lenses concentrate the rays of the sun onto pinhead-sized multi-junction solar cells. With the aid of a tracking motor, the CPV cells, which are attached to a pillar, follow the sun precisely to achieve an optimized yield of solar light. They supply the energy for a submersible pump that pumps the water up from a well that is 105 feet deep and for a small desalination unit that satisfies farmers’ potable water requirements. The CPV cells also supply the energy for PV-module trackers, the monitoring and control system and an air-conditioning unit that cools the utility room of the facility. In order to make the complete system as inexpensive as possible, the developers largely did without expensive batteries for the intermediate storage of the energy gained from the solar cells. “Where there is no public power grid, the PV systems currently operate cost-effectively, due to their low operating costs. The only problems are posed by the high initial costs of the investment, in which the batteries play a substantial role,“ explained Jakob Wachtel from the Fraunhofer Institute for Solar Energy Systems ISE (Germany). “By immediately using the largest share of the energy that is generated we can save on expensive storage media capacities,“ adds his colleague, Alexander Schies. A sophisticated energy management system monitors the generation of energy and ensures that it immediately goes where it is needed at the moment, such as the submersible pump to fill up the water reservoir, the irrigation pump when it is time to irrigate the field or the desalination unit. Developers only store some of the solar energy in a relatively small battery to operate the CPV tracker and the measuring system. “We need this reserve, in particular, to align the CPV modules in the morning to their morning position,“ explained Jakob Wachtel. Unlike traditional solar modules made of silicon, the concentrating photovoltaic systems provide energy only if they are precisely aligned to the sun.

CiA 454 application profile
Originally, this profile was developed for battery management of Pedelecs (bicycles with electrically-powered motor) and other light electrical vehicles (LEV). In the meantime it has been generalized for usage in all battery-powered systems. The profile still includes some LEV-specific device interfaces. If they are not needed as in stand-alone photovoltaic systems, they are not implemented. The generic approach of this profile makes it also suitable for battery-powered service robots and other kind of vehicles including forklifts and self-guided vehicles. The version 1.0 of the CANopen profile has been released CiA internally.

All of the irrigation system components have micro-controllers that transmit their status data to the energy management system that controls them. The Universal Energy Supply Protocol (UESP) developed at the ISE was designed especially for this type of energy and load management and is the form of the communication of choice. Currently, the UESP is being integrated into the CiA 454 CANopen application profile, which suitable for grid-independent energy supply systems. CANopen is rather prevalent in automation technology and has established itself as the standard for the control of electrical devices. “All systems that work with these kinds of protocols can be expanded at any time with devices that ‘understand’ CANopen or UESP – completely independent of the manufacturer. This is practical if a defective component has to be replaced,“ emphasized Alexander Schies. This, too, contributes to the savings. At the same time it simplifies the maintenance and further development of the stand-alone CPV system.

Motor, drive, and feedback connections in one unit

Since August 2017, trucks from MAN are equipped with Rio-Box acting as an interface between the vehi...

TR-Electronic (Germany) introduced the CR_582 CANopen solution with two encoders in the space for on...

Fighting against the coronavirus using CAN

The robots by UVD robots (Denmark) are deployed in hospitals to disinfect rooms and equipment such a...

Utilizing service robots to prevent the spread of Covid-19