The team of the High-Octane Motorsports society (Germany) has presented the racing car FAUmax zeta for the season of 2013 at the Fraunhofer IIS (Germany). In the racer, all the automotive electronics are running via a CAN network. 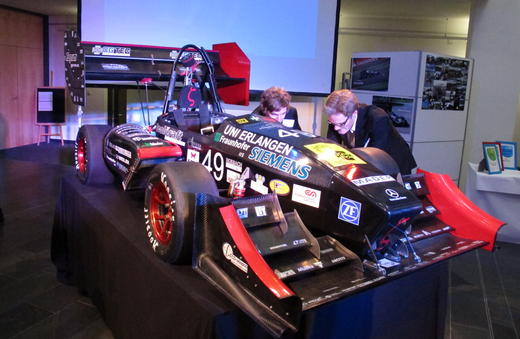 FOR THE FIRST TIME, THE COMPLETE automotive electronics are running via a CAN network, which takes over the integration of the different electrical control devices, and which makes them more dependable through digital control. Similar to modern passenger cars, several devices can be controlled via the same data line. This permits a simpler wiring, which gave the students the opportunity to create a more compact cable harness. "Not only the installation, but the replacement of control devices, is a lot simpler and flexible with the CAN network. At the same time, the default risk of the automotive electronics is minimized," explains Joachim Lohse.
In view of the upcoming competitions in Hungary (Györ), Austria (Spielberg), Czech Republic (Králové) and Germany (Hockenheim), this will be a crucial point.
The FAUmax zeta accelerates from zero to 100 km/h in 3,6 s and only weighs 160 kg thanks to the use of Carbon Monocoque. Last years car had a weight of 172 kg. The calculation, the construction, and the production are a lot more complex because of the use of carbon. Joachim Lohse, team manager of High-Octane Motorsports, explained: "Thanks to the help from our sponsors and the commitment of our team we were able to realize the new chassis concept. Through that, we reached a new torsion rigidity. In comparison to a steel frame we were able to achieve a distinctly lower weight, partly because we were able to forgo an undercarriage." The necessary compact pressure is managed through the front and rear wings, which are built out of four, instead of three, individual elements.
For the motor, the team used an Aprillia SXV 550 V2-cylinder with a capacity of 553 cm3. Besides some miner improvements, like the reprogramming of the coupling, as well as a more efficient and developed cooling system, the budding engineers also further developed the pre-chamber ignition from last year. This enables a fast and homogenous lean burn and provides low mileage. Furthermore, a rebuilt test rig with its own measuring software allows for the calibration of the motor, like an automatic analysis of the parameters for an optimal air-fuel-ratio. 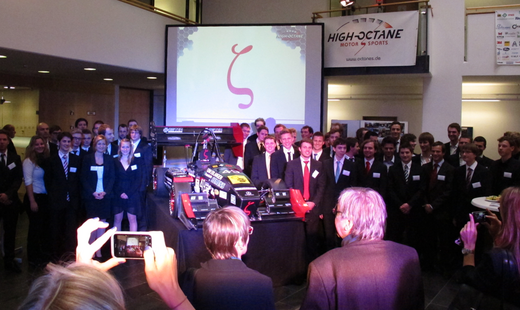 In the High-Octane Motorsports society up to 80 students of the Friedrich-Alexander-University Erlangen-Nuremberg work on the racer, with which they take part in the yearly construction competition of Formula Student. The Fraunhofer IIS has supported the society since its foundation seven years ago.

The Fraunhofer Institute for Integrated Systems and Device Technology (IISB) has chosen the IVT-S sh...

Fraunhofer (Germany) has developed at the request of its industrial partner, Otto Bock Mobility Solu...