Emtas (Germany) is going to release the free Energybus demo kit at the SPS IPS Drives trade fair in Nuremberg (Germany). It gives users an insight into the mechanisms of Energybus, the CANopen based device profile for components of light electric vehicles (LEVs). 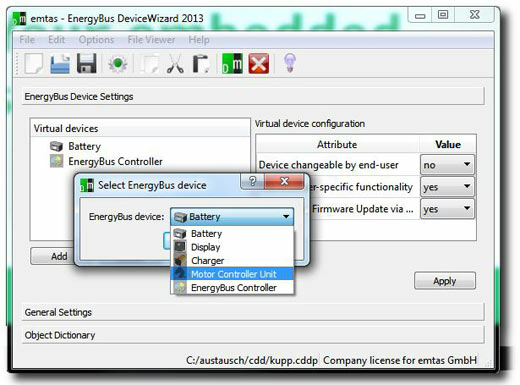 THE SOFTWARE PACKAGE INCLUDES A PRECOMPILED ENERGYBUS LIBRARY AS PC VERSION. For the device simulation either the virtual devices battery or security device can be chosen. The EBC (Energybus Controller) is included as PC version with graphic user interface. In addition, a demo version of the Device Explorer tool for test and diagnostic tasks is part of the delivery.

For those who want to go a step further, the Energybus starter kit is available. This package provides users with tools to get more knowledge of the Energybus technology. Included is the software for one of five components. In addition, the Staterkit includes the Energybus Device Wizard for the device configuration. The Energybus Controller as PC version, a user license of the Device-Explorer tool, a USB-CAN interface and the STM32 prototype board allow users to make first steps for their device development with Energybus.

The piCAN-EB-Charger by Pironex (Germany) is an Energybus charger for lithium-ion and lead-acid batt...

Emtas (Germany) announced the release of the Energybus framework. Device manufacturers for pedelecs ...

Version 1.6 of the CANopen master and slave stacks by Emtas (Germany) will be released at the SPS IP...

Emtas (Germany) has released the Modbus/TCP-CANopen gateway software. The program compliant with the...