To fulfill the chronicler's responsibility

Unfortunately, our publisher team could not report about all CAN-relevant solutions released in 2012, primarily for lack of time. Another reason is that other online or printed magazines already published this information. To fulfill our chronicler's responsibility, this article gives a short overview about CAN solutions not yet published this year.

The information is divided into categories according to these of the CAN Newsletter Online and is placed in alphabetical order regarding the company name. Each entry contains the company and product name as well as a short description of the product. The URLs of the manufacturer's, as usual provided on the left side, allow the reader to get more detailed information about the solutions and to find contacts for further questions.

ESR Pollmeier (Germany) introduced the MH 4 torque motors for pique torques of up to 800 Nm. Using company's drives, the devices may be integrated in CANopen networks using the CiA 402 specifications.

Jetter (Germany) provided the IP6K9K-protected servo amplifier JMM-5000 for mobile use in harsh environments. The device with two CAN ports helps to electrify motion systems of mobile machinery.

ABB (Germany) introduced the AC500-XC PLCs with CANopen-connectivity for extreme outdoor conditions. It features extended immunity to hazardous gases and salt mist and may be used at -30 °C to +70 °C and at up to 4000 m above sea level.

Acceed (Germany) distributes the ARS-1200 and ARS-1600 controller with two CAN interfaces used in manufacturing systems, factory automation, and industrial applications. The devices are produced by the Taiwanese manufacturer Vecow.

Emtrust (Germany) produced the ICP Box-PC-85 typically used in industrial control, automation, measurement, medical and infotainment applications. The device with a CAN port accessible via the 9-pin D-Sub connector is based on the 1,33-GHz Intel Core I7 processor. 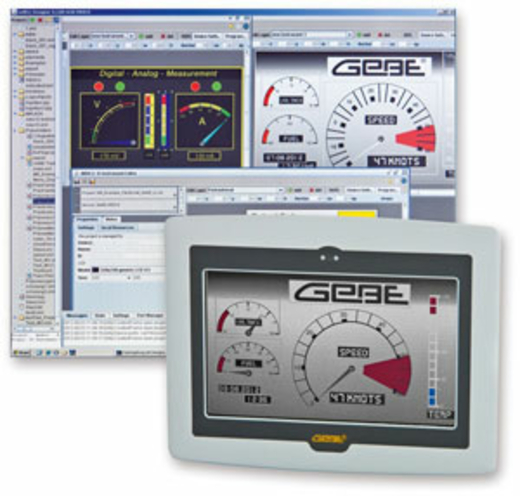 Gebe Elektronik und Feinwerktechnik (Germany) introduced the Linux-based HMI and controller device series Gebe-Indico and the Java-7-based Gebeindico designer software. Control functions are transmitted via CAN or Ethernet. The devices may be equipped with 3,5-inch or 7-inch touch-display.

Jetter (Germany) introduced the automotive controller JCM-52x with two CAN interfaces supporting bit-rates up to 1 Mbit/s. The Codesys-enabled device with a programmable display includes the 500-MHz ARM11 CPU, 128 MiB of RAM and 512 MiB of Flash.

Far Systems (Italy) offered the IGW450-CAN gateway providing WTB (wire train bus) to CAN connectivity. On the CAN side CANopen is supported with maximal bit-rate of 500 kbit/s. The device bases on the 25-MHz MC68360 CPU by Motorola. According configuration tools are available. 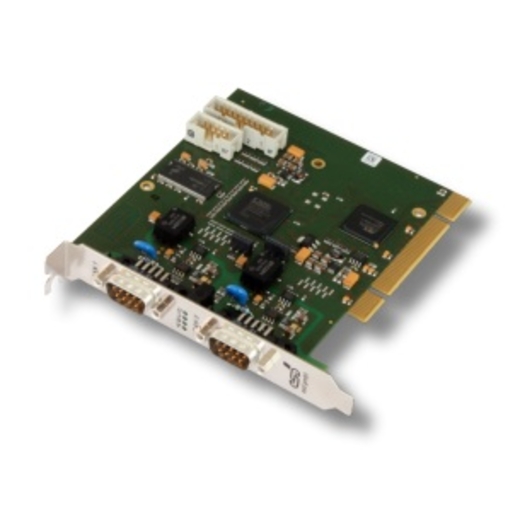 ESD (Germany) produced the CAN-PCI/400 PC interface card. Variants with two or four high-speed CAN interfaces are available. Bus mastering and local data management are fulfilled by an FPGA. Error simulation and CAN diagnostics are supported.

Janz Tec (Germany) extended its PCI-CAN interface product range by such features as a 128 KiB non-volatile SRAM typically used in automation to save the status of a network. An extension connector allows plugging a CAN-PCIx/EXTO module to add two further CAN ports.

Bosch offers the CAN transceivers CF150 to CF175 with 5-V or 3,3-V µC interfce as well as CC750 and CC770 CAN-controllers for in-vehicle communication use. IP modules with high-speed CAN and TTCAN for networking applications are also available.

Argo-Hytos (Germany) produced a particle counter for continuous monitoring of the contamination in oil fluids. The device with a CANopen interface is suited for pressures up to 420 bars. The counter is also distributed by the German company Lösi Getriebe-Steuerungen-Hydraulik.

Bedia Motorentechnik (Germany) introduced the ITS65 tank sensor for fill level and temperature measurement of hydraulic and motor oils. The IP69k-protected device provides an optional CAN interface. Company’s ITS60 sensor is dedicated for use with diesel fuels.

Elbau (Germany) provides MEMS pressure sensors (2,5 mbar to 25 bar) and flow sensors for gases (up to 200 l/min) and fluids (up to 3 l/min). The devices offer CAN communication possibility as well as further analog, digital and wireless interfaces.

Genesys Elektronik (Germany) manufactures the ADMA-Baro barometric altitude sensor with CAN or EIA-232 data interface. The device is used for precise height profile measurement of a driving lane. It is used as an extension to company’s GPS ADMA (automotive dynamic motion analyzer) system. 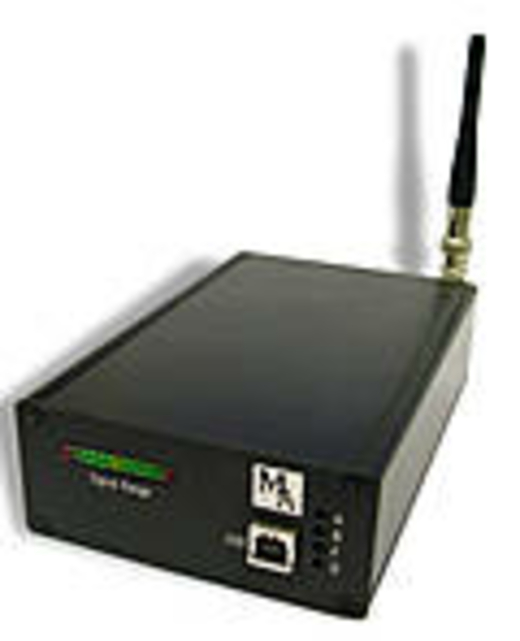 Manner Sensortelemetrie (Germany) provides the CAN-capable IP65-rated radio-sensor telemetry systems for difficult measuring environments. In addition to the radio cell, the system consists of a miniaturized sensor signal amplifier connected to the sensor elements. Sensor signals are amplified, filtered, digitized and may be transmitted wirelessly up to a range of 50 m.

Panasonic Electric Works Europe (Germany) launched the DeviceNet-connectibe SC-GU3-02 communication unit for a block connection of up to 16 company’s compatible sensors. The sensors may be then controlled individually or in a block. The integrated IR (infra red) communication of the sensors is used for inner-block connection.

TR-Electronic (Germany) developed the LMC55 linear measuring system with a CANopen interface. Contactless position measuring of up to 30 positions simultaneously with a resolution of 0,05 mm is possible. The measuring range is up to 20 m.

Delphin Technologies (Germany) introduced the Logmessage universal data logger with a CAN port. It is shipped with the Profisignal Go software, which allows offline and online evaluation of data. 3,5 GiB of memory for up to 250 million of measured data is available. Company’s CAN-capable Profimessage device is used for universal vibration measurement.

Imtron (Germany) announced the Siquad CAN top hat rail modules for data acquisition applications. The measured data is output on the CAN interface. Device’s configuration is done via the USB-CAN interface using the Dasoft software. The also announced Siquad CAN-Stick is a device for PC-controllable signal conditioning of diverse sensors.

LTT Labortechnik Tasler (Germany) launched the multi-functional data acquisition device LTT24 with a CAN interface. It combines the functionality of a transient recorder with a 24-bit ADC and 4 Megasample/s per channel with amplification functions for voltage, current, ICP, strain gauge, resistance, and temperature. 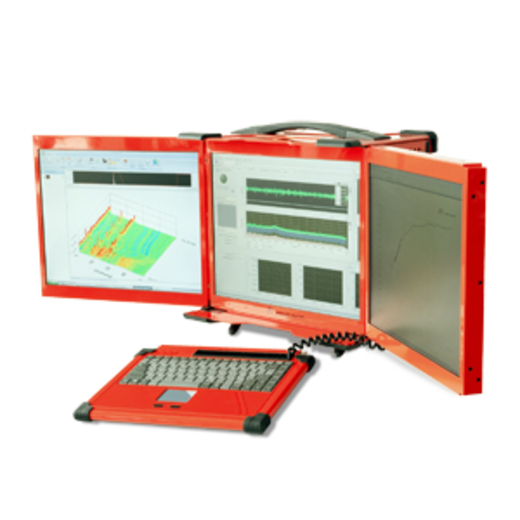 Red-Ant (Germany) produces the MIG16 SFE tool for early failure detection. The CAN-capable solution is used for permanent long-term testing of gears and endurance tests for engines. It includes the 3-GHz Intel Core2 Duo processor and 4 GiB of memory.

Soundtec (Germany) introduced the Sivision on Livepad tool system for acoustic analysis. The device with a high-speed CAN interface offers real-time noise and vibration analysis function, comparison and filtering of acoustic variants and automatic noise testing. Company’s data acquisition software Sirecord supports the CAN module CAN4 by Zodiac
Aerospace.

Synotech (Germany) offers the CW-200 machine status monitoring device with CAN interface. The unit gathers and monitors up to four machine parameters such as vibration, temperature, number of revolutions, pressure or load. Device’s configuration and online operation modus is done using the CAN-USB adapter.

Vehicle tracker product line with CAN

For less than 16-kg e-bikes

CAN FD device for programming and testing

Advantech, provider of industrial computing platforms, has announced the TPC-100W. It is an ARM-base...