At the SPS IPC Drives 2012 trade show some manufacturers showed their solutions for interfacing available products with the CAN network. Thus, such interface boards enable the devices to communicate using CANopen, DeviceNet or proprietary CAN-based higher-layer protocols. Here is a short overview of presented interface board products.

Asem (Italy) offered the Netcore X communication cards in PCI/APCI and MiniPCI/MiniAPCI formats for CANopen and CAN layer-2. These may serve as a link between the PC and the I/O devices on the machine and allow control and visualization applications to obtain the information from the field. The devices provide a DLL library for developing applications (using C, C++ or .Net) on 32-bit Windows (XP, Vista, Seven), or Windows CE systems. Using the CANopen protocol, the integration with Codesys is automatic and does not require the writing of a code to implement the communication stack.

Maccon (Germany) launched the CAN-connectable Macinverter embedded controller board for motion control and inverter systems powered with up to 1 MW. The device dimensioning 68,5-mm x 68,5 mm x 12 mm is compatible with DC (also brushless) and AC electronic motors. Several motors and power bridge circuits may be controlled via one board. Torque, velocity and position field-oriented control are possible.
The available feedback interfaces include incremental or absolute encoders, resolver as well as Hall sensors. Further, digital and analog I/Os, Ethernet, EIA-232 and EIA 422 interfaces are available. The company founded 1982 in Munich celebrates this year its 30th unniversary. 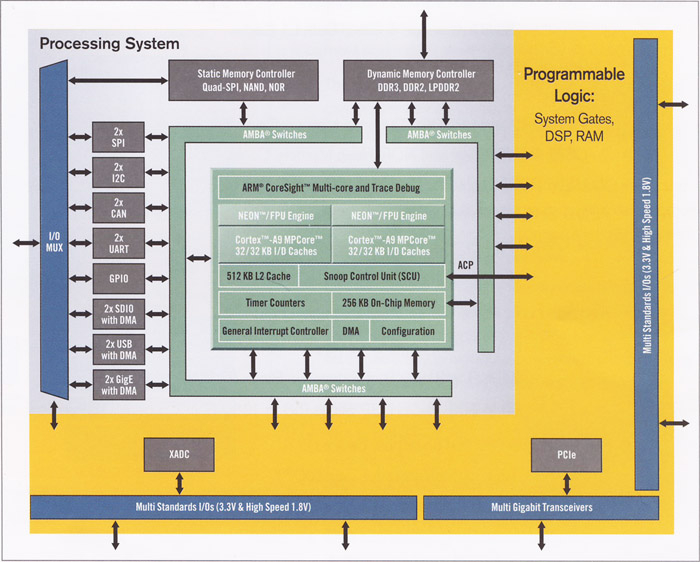 Xilinx (UK) announced that for the Zynq-7000 EPP extensible processing platform with two CAN interfaces a CANopen NMT slave function is on development by company's partner ETR. 11-bit and 29-bit CAN-IDs are supported. USB, Gigabit Ethernet, UART, SPI, I2S, SDIOs and GPIOs are offered as well. The SoC (system on chip) bases on the ARM Cortex-A9 processor and offers the Xilinx 7 28-nm programmable logic. The EPP is a product family enabling solutions with scalable features and a defined software tool. For example, the device is used in broadcast cameras, industrial motion control and camera-based driver assistance applications.

The automation trade fair in Nuremberg beating the previous exhibitors (1458) and visitor (56874) nu...

A few of CAN-connectable I/O modules were introduced at the SPS IPC Drives 2012. These devices are m...

The Q7-IMX6 from MSC (Germany) is a CAN-connectable embedded module with graphics capabilities. It i...

The Sedoio-C gateway by Sedo Treepoint has successfully passed the CANopen conformance test by CAN i...

The slip ring transmitters from Moog Rekofa provides secure transmission of data, media, and the ang...