CiA has introduced the service of interoperability testing for CANopen devices in its laboratory. Faulhaber’s (Germany) MCBL300x motion controller family are the first CANopen products, which passed this test. 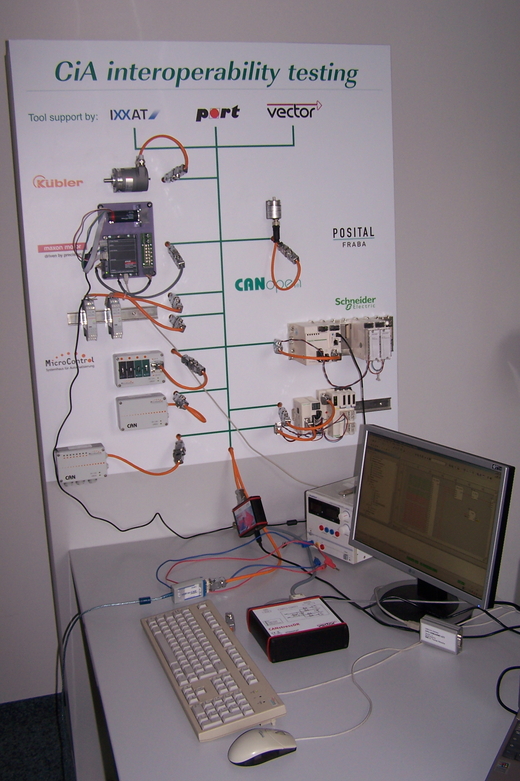 IN CONTRAST TO THE CONFORMANCE TEST, the aim of the interoperability test is to assure that CANopen devices are capable of interacting with a variety of other CANopen devices, from multiple vendors, all integrated and communicating with one another in a test environment. The device-under-test (DUT) is proofed in the “golden” CANopen network installed in the association’s laboratory. The motion controller submitted by Faulhaber is the first device that passed it. The test procedure assures that this product is capable of interacting with a variety of other products from different manufacturers, all integrated into the same test stand. It also includes some stress tests in order to proof that the DUT runs even at high busloads or with long bus-lines, for example.
CiA also organizes so-called plug-fests, during which manufacturers connects ad-hoc there CANopen devices to test interoperability between different products. The next CANopen plug-fest will be dedicated for CANopen Safety products. The interoperability of CANopen Safety devices is not in the scope of the functional safety testing and certification by national authorities.

Faulhaber (Germany) has introduced a series of brushless DC servomotors with an integrated motion co...

Open networks like CANopen are beautiful. Theoretically, you can buy any product, plug it to the net...

CAN controller for avionic applications

The HI-3110 CAN stand-alone controller by Holt Integrated Circuits (USA) has passed CAN conformance ...

In a plugfest, several CiA members connect their CANopen products and test them regarding the achiev...

Ethernet "tunneling" via CAN XL