On the 13th international CAN Conference (iCC), Bosch officially introduced the CAN FD protocol. Together with Vector, the car supplier demonstrated a CAN FD network running up to 15 Mbit/s on normal CAN cable using off-the-shelf CAN transceiver chips. The CANoe tool has already been adapted to the enhanced protocol. 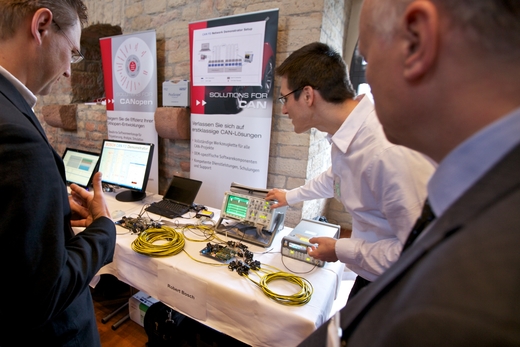 THE TRANSMISSION RATE IN CAN NETWORKS is limited due to the necessary in-bit time response during arbitration and during acknowledge. In addition, the payload is restricted to a maximum of 8 byte. General Motors (Opel) requested to overcome these limits for its next generation of compact cars. CiA, representing the non-automotive users, was also considered during the development of CAN FD. Last summer, Bosch published a white paper on their website. At the iCC in Hambach castle, Florian Hartwich presented more details about the new protocol.

The CAN FD protocol is based on the normal CAN protocol. It was required to accelerate the serial communication while keeping the CAN physical layer unchanged. There are mainly two improvements. Firstly, decreasing the header-to-payload ratio due to the longer data fields. Secondly, speeding up the data frames by shortening the bit time during the time when just one node is allowed to transmit bits. But these steps are only the groundwork, some additional measures are needed, e.g. to keep the Hamming distance of the longer frames at the same level as in standard CAN and to account for the CAN transceiver’s loop delay. The CRC polynomial of CAN is suited for patterns of up to 127 bit in length including the CRC sequence itself. Increasing the CAN frame’s payload makes longer polynomials necessary (17-bit CRC for data-fields up to 16 byte, and 21-bit CRC for longer data-fields).

The shown prototype used a bus-line topology. When implementing passive star topologies with single or dual termination resistors, the achievable speed-up is much lower.

CAN FD extended frame (29-bit identifier) with a 64-byte data-field transmitting 12 Mbit/s in
the data-phase; during arbitration and acknowledgement the normal CAN speed is used.

There is another nice-to-have feature in the proposed CAN FD protocol: The ESI bit (error state indicator). It provides in the frame information, if the node is in error active or error passive state. It is also possible to send longer data frames without switching to a faster bit-rate.

During the conference, many engineers welcomed the new protocol. On the other hand, a deadlock situation could emerge: The chipmakers might wait for commitments of the OEMs; and the carmakers first want to have chips to build prototypes to test the new approach. Some conference participants requested the CiA to take the lead in promoting the CAN FD protocol. The speaker from PSA Peugeot-Citroen said: "CAN FD may provide a good trade-off between the difficulty of the migration path to other communication technologies and additional bandwidth availability."

The nonprofit CiA (CAN in Automation) association has released the CiA 610-1 document as Draft Speci...

CANopen today, tomorrow, and beyond

The history of CANopen has not been written, yet. CANopen is still evolving. CAN in Automation (CiA)...

To meet at the CAN in Automation (CiA) booth on exhibitions is an important discussion forum for the...

CAN FD is set and CAN XL is in the pipeline

About 800 automotive engineers participated in the two-day event organized by VDI. In the accompanyi...

CAN in Automation (CiA) has released the CiA 604-1 CAN FD Light specification as Draft Specification...

CAN in Automation (CiA) has announced the opportunity to get access to the video-recorded presentati...