The CiA 460 and CiA 318 documents specify the usage of CANopen networks in an Robot Technology Component (RTC) environment. RTC has been developed by the nonprofit OMG (Object Management Group). 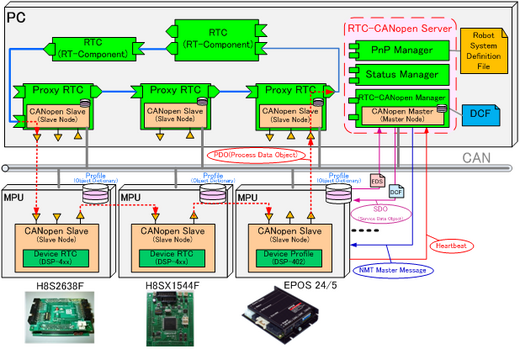 JAPANESE CiA (CAN IN AUTOMATION) MEMBERS HAVE developed the CiA 460 CANopen service robot controller profile and the CiA 318 specification describing the integration of CANopen networks into a Robot Technology Component (RTC) environment. RTC, a general framework for distributed robot control system, specified by the nonprofit OMG group, has been chosen by several Japanese service robot research projects. In order to make use of low-price CANopen products such as sensors and servo controllers, the above-mentioned specifications have been developed. The CANopen service robot controller implements all complementary profiles of the CANopen connected devices. This approach allows an easy integration into a more complex RTC system comprising different sub-systems. In many service robot applications, there are several only loosely coupled sub-systems installed. In a typical example, there are the movement controller and the handling controller for dedicated services. First implementations have been prototyped and tested by the Shibaura Institute in Tokyo (Japan).

Over hill, over dale: The six-legged robot does wander everywhere

Over rough and smooth: Lauron, the six-legged robot, developed by researchers at the FZI (Germany), ...

Fingripper, the bionic handling assistant by Festo and Fraunhofer IPA institute hands the glasses to...