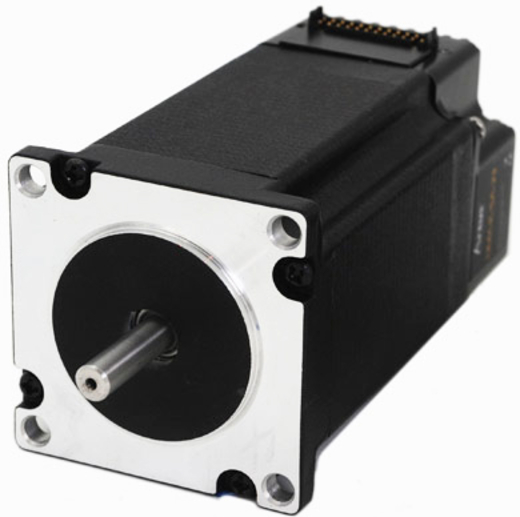 BY DEFAULT THE MOTOR STARTS WITH AN ACTIVE EIA-232 communication. The system designer may configure the device with a fixed 16 micro-step setting via this interface, may store the configuration data, and may enable then the CANopen communication. After the next power cycle the drive starts in the CAN mode. The device provides all necessary process data (control-word, status-word, modes-of-operation, modes-of-operation-display, target and actual values for velocity and position). Besides some CiA 402 configuration parameters, the product implements several proprietary parameters including for setting the CAN bit-rate and CANopen node-ID, which could lead to problems in case of resetting to the factory setting.
The default CAN bit-rate is 125 kbit/s; the device supports all CANopen bit-rates.
The CANopen device also provides six local digital inputs and three digital outputs as specified in CiA 402. All I/O lines are opto-isolated. The device requires a 12- VDC to 35-VDC power supply, and provides up to 2,5 A. The incremental encoder features 4000 counts per revolution with a 4-quadrature decoding.
The homing mode allows the stepper motor to perform different homing methods to find the desired home position. This includes homing with inputs, limit inputs, or by means of the z-index of the integrated encoder. By using the profile velocity mode, the device can move in either direction when a target velocity is given. The profile position mode allows the product to move to a desired target positions. Various speeds and motion profiles can be used when performing this movement. The motor, which is available in different stack sizes, features trapezoidal and sinusoidal profile types. In “single set-point” mode, the device moves to the target position, confirms the reaching of the target, ramps down to a stop, and waits for a new target position transmitted by the host controller. In “set of set-points” mode, the host controller downloads several target values, and the drive starts after each set-point reached immediately the movement to the next target. Only if all set-points have been reached the stepper motor ramps down.

Three ways to use encoder feedback on stepper motors

Applied Motion Products (USA) announced the release of a training/tutorial video regarding the use o...

Nanotec (Germany) has expanded its PD4-N-IP plug-and-drive motor line with the PD4-N5918M integrated...