Axiomatic Technologies (Canada) released the AX100700 stepper motor controller suited for the harsh environments found in off-highway and on-road vehicle applications. The driver may be integrated into a motor drive system for control of fuel injection. 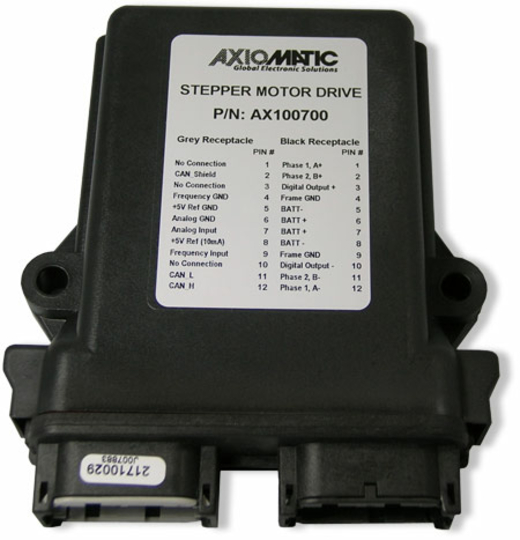 THE DRIVE IS DESIGNED TO GIVE THE USER ACCESS to the 2-A A3979 drive control chip via J1939 command messages. It allows for control of the levels, waveforms, timing, and phase-shifts of the current for a two-phase stepper motor. Motor direction is user-selectable. The control algorithms may be customized to suit specific applications. In the standard version, the unit is configurable using company’s Electronic Assistant service tool. Using the tool, it is possible to set the default values for the stepper motor as well as the default targets and ranges for the run-time variables such as the step rate the motor is to run at, or the number of steps the motor is to take before holding. The run-time variables are accessible with the tool and may be independently controlled via SAE J1939 messages received while the unit is operational. This means that while the tool is used for initial setup and configuration, all the drive values may be changed as needed without it.
For rugged machine applications, the device features the Deutsch IPD EEC-345XB enclosure and 24-pin connector. It operates with 12 VDC or 24 VDC power with surge, over and under voltage protection for battery-powered devices. The drive also features two inputs that could be used as the command source for a run-time parameter, rather than a CAN message. Alternatively, the inputs could be used for feedback in a PID control, or as digital controls, for example to e-stop the device. They could also be sent independently to the J1939 network as input data for another device on the CAN network. Additionally, there is one +5-V reference and one frequency or PWM input for inductive and active sensors. The drive has a single digital output, capable of sinking up to 5 A, to drive a relay, brake or other load in a system. By default, the output is controlled by a CAN message received from the J1939 network, but it could be controlled by one of the inputs instead too. The output may be setup for a simple on/off response, or to blink indicating a fault has been detected by the drive. 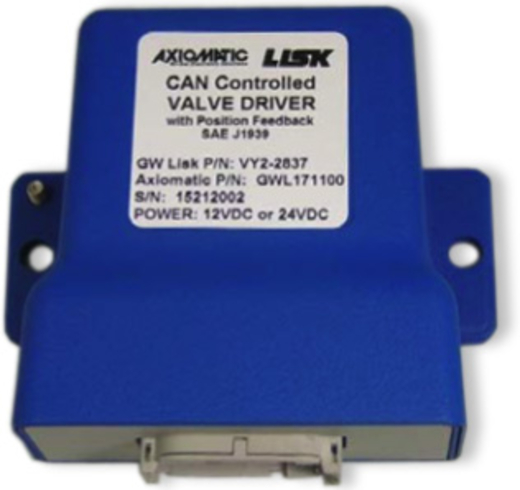 Recently, Axiomatic and the G.W. Lisk Company (USA) developed the PVD J1939-controlled valve driver with position feedback. The controller with high temperature capability is used for under-hood installation in the transportation industry (e.g. control of closed loop engine actuators). The PVD has one configurable universal input (voltage, current, PWM, frequency or digital), and one proportional current output (0 A to 4 A) for driving a control valve or a hydraulic actuator. The device is controlled via the J1939 network and may also send operational status and/or positional information back to the network. The module uses the Simulink software environment. It is configurable using the company’s Electronic Assistant tool. For rugged machine applications, the IP67-rated device features an aluminum enclosure, gasket and a 12-pin Deutsch IPD DTM15-12PA connector.
Axiomatic designs and manufactures rugged electronic controls for the off-highway, power generation, bus, truck, as well as oil and gas equipment industries. G. W. Lisk has been providing solenoid valves, LVDT’s (linear variable differential transformer) and flame arrestors to the transportation, commercial, aerospace and other industries since 1952.

Axiomatic has designed a new series of controllers with high-temperature capability for on engine or...

Display with CANopen or J1939 interface for machine control networks