AC drive with CANopen and DeviceNet

Vacon (Finland) has launched the Vacon 20 family of drives. The products are optimized for OEMs (original equipment manufacturers) featuring 0,25 to 7,5 kW. Optionally, a CANopen or a DevcieNet interface is supplied. 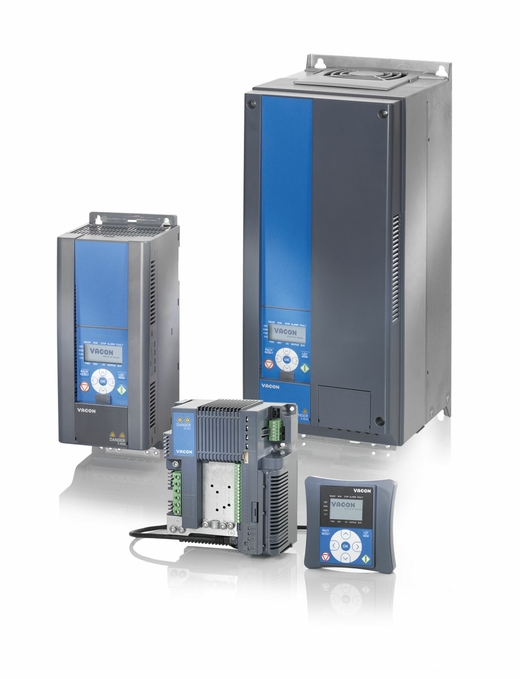 TYPICAL APPLICATIONS INCLUDE pumps and fans, conveyors as well as packaging, processing, and washing machines. The Cold Plate variant shares the control and power topology with the Vacon 20 drive, but offers additional cooling solutions. It is designed for textile machines, hoists and cranes as well as compressors and heat pumps. As the cooling is done through a clear cooling interface, it is possible to use different cooling media depending on the situation. By attaching the drive to a heat sink with large cooling ribs, a fully passively cooled drive is created. As an alternative, the drive can be mounted on a plate, which is cooled by liquid in order to create a liquid cooled drive solution. Other possible cooling media include different types of refrigerants or metal constructions with a high heat energy conducting mass.

“OEMs are an important customer segment for our growth and success,” said Heikki Hiltunen, Executive Vice President at Vacon. “In 2010, more than 25% of our sales came from this segment.”

“CAN plays multiple roles in our products.”

Some inverters can be connected via a CAN network using the CAN adapter boards. The boards support data-rates up to 1 Mbit/s at a 25-m network length. Lower bit-rates allow longer distances. In this application the Monitorbus protocol developed by Vacon is used. The NCDrive software tool can then communicate with any of the drives on the network. With the NCDrive tool the following functions are possible:

The different CAN networks are linked together using a CAN/Ethernet gateway so that drives can be located over a large area. This topology allows a total of 255 drives. The maintenance person can sit at one central place and monitor all the drives. Remote monitoring and analysis is also possible by using a modem or VPN (virtual private network) technology. Configuration is done by giving a unique CAN node number (1 to 255) for each drive on the network. IP addresses are set for CAN/Ethernet gateways.

CAN is also used for fast drive-to-drive communication. This is done with the CAN process data protocol developed by Vacon. Drive-to-drive communication is mainly used in master-follower applications. This is, one or more drives follow the speed or torque from the master drive. It is also used to develop custom-built applications, where data exchange between the drives is required. 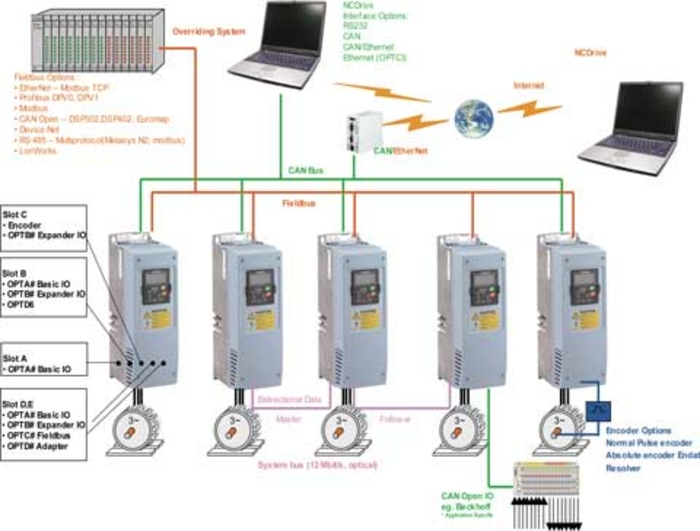 Using the CANopen interface board, the drives can be controlled and monitored from an automation system. The inverters are compliant to CiA 301, CiA 302, and CiA 402. The Euromap 29 (CiA 420) profiles for extruder downstream devices are supported, as well. There are also CANopen profiles, where the process and configuration data are manufacturer-specific applications. So far more than 300 applications have been made using a simple and easy to use tool based on IEC 61131-3.

Some drives have a built-in CANopen NMT master functionality. This allows to control CiA 401 compliant devices. Any third party CANopen I/O module can be connected to the drives. This is useful in applications, where a larger number of I/Os is required. It is possible to support up to decentralized 512 digital I/O lines and 32 analog I/O ports. The default CAN bit-rate is 125 kbit/s; the maximum network length is 200 m.

The iPos 3602MX motion controller by Technosoft (Germany) embeds a PLC and provides a CANopen interf...

IGBT inverter with CAN connectivity

Nanotec (Germany) has introduced the PD2-N stepper motor series, which is configurable by means of P...