B&R Industrie-Elektronik (Austria) has provided the Automation PC 910 series. The devices with CAN interface implements Intel’s QM77 Express chip-set, which is based on the i3/i5/i7 processors with up to four cores. 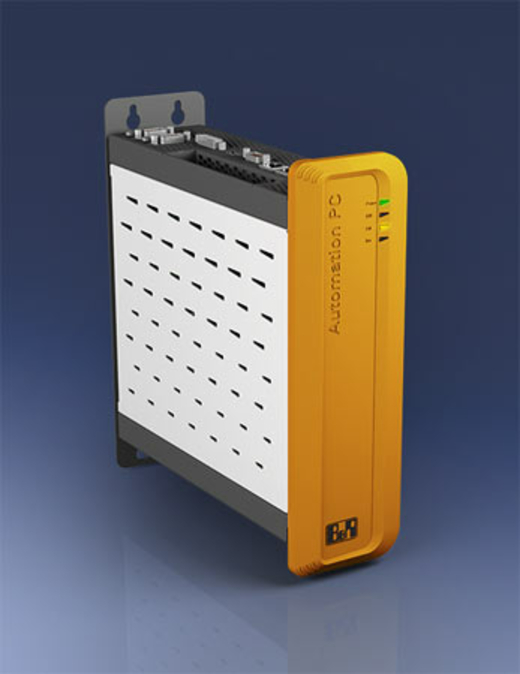 THE INDUSTRIAL PCs ARE ENCASED in a metal housing. They utilize heat pipes to achieve optimum heat dissipation in the housing. These hollow tubes are used to transfer heat away from a small surface area. Heat pipes are very light and take up very little space within the PC housing. Simulation models were used to redesign and enlarge the vents in order to provide a larger opening for air circulation while retaining the robustness and stability of the housing. This makes it possible to operate Celeron processors and selected Core i-series CPUs without a fan.
The device uses Intel's integrated HD graphic processor 4000 with DirectX 11 capable API (application programming interface). This allows graphics tasks, such as visualization systems, without requiring an additional graphics card. Besides the CAN interface, the devices are equipped with two 1-Gbit/s Ethernet lines, two serial ports such as EIA-485, and one USB-3.0 port. The series come with up to five PCI / PCI Express (peripheral component interconnect express) sockets.


User will be able to mix and match CPU performance with different sized main units as needed. For example, a quad-core CPU can be used in a single-slot housing or a single-core Celeron can be used in a five-slot housing. The system runs Linux or Windows Embedded Standard 7 operating system. The premium version of Windows 7 is also available, which provides features such as support for multi-touch panels and multilingual user interfaces. Panels can be connected via SDL (smart display link) interface using a single cable. SDL permits large distances between panels. In addition to the SDL interface, the PC also has a Display-Port interface.

The PC-based controller has a serial ATA-based CFast card to replace the previously used CompactFlash. The company has chosen the approach of combining compact, CFast-based removable media with standard PC solid-state drives and hard disks in their latest industrial PC. This allows the CFast card to be used as removable storage for transferring data or installing upgrades. "We give the user 100 percent freedom to optimize data storage," explains Raimund Ruf working with the supplier. “This allows them to separate operating system and process data, for example. We've completely redesigned the cooling system for the Automation PC 910 to optimize heat dissipation out of the housing.”

Fanless embedded system with CAN connectivity

Controller for 4- and 6-axis robots

Denso Robotics (Japan) has introduced the RC8 controller. It has a footprint of 12 x 18 inch and a h...

With CAN add-on card option