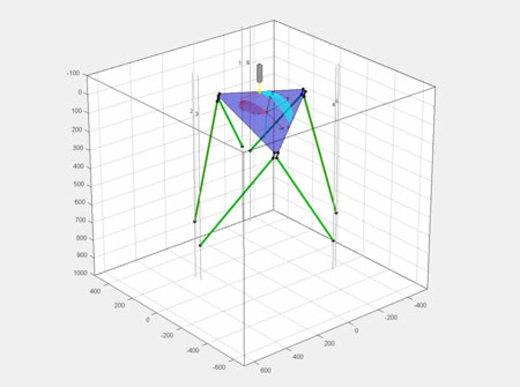 THE CNC (COMPUTER NUMERICAL CONTROL) CONTROLLER supports specific functions for cylindrical grinders to oxy-fuel cutting machines. The numeric functions are continually under development. The motion control functions according to PLCopen allow operation of additional handling axes. The device supports CANopen, Sercos III and Ethercat interfaces. The CAN network is accessible via an optional plug-in module. Company’s Ethernet-based XBM I/O system may be used for real-time communication with update times < 1 µs. The system with 54-mm high modules is directly plugged into the controller or is connected via an appropriate bus coppler module. The E°Tools Pro offers a tool library for engineering of automation solutions based on the presented controller.
The drive and control functions may be planned, programmed, commissioned and analyzed. On company’s stand, a Hexapod demonstrator will be presented. The demonstrator will be controlled by the CANopen-capable E°EXC 66 controller transforming the Cartesian coordinates into the axes-coordinates and calculating the axes movements back into the movements of the instrument tip. This function, offered by a few of manufacturers, allows for precise control of parallel kinematics depending on the trajectory velocity. Hexapod kinematics with an absolute encoder are supported allowing fast operation continuation after a reset or a power-supply loss. The device is also able to control Tripod applications as well as Hexaglide kinematics. For these operation types, the company uses the virtual initiation with Matlab und hardware-in-the-loop simulation.

Eckelmann (Germany) is extending the modular, configurable safety system E°SLC with a CAN coupler s...

Eurotech (Italy), a supplier of embedded products and systems, has signed contracts with a medical d...

Drives for servo motors with up to 1 kW

At the SPS/IPC/Drives 2012, Wittenstein Motion Control (Germany) will present the CANopen-capable Si...

The setup and commissioning of refrigeration systems in supermarkets or cold stores is made easier w...