PLC with CANopen or J1939 connectivity

The FX3U series by Mitsubishi (Japan) includes PLCs (programmable logic controller), which are connectable to CAN networks. The manufacturer provides software support for CANopen and J1939. The products are the successor of the FX2N-32CAN controller. 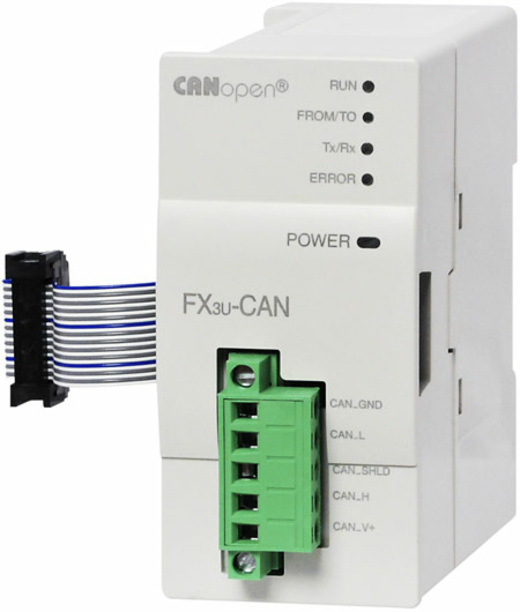 THE PLC IS EQUIPPED WITH UP TO 128 I/O CHANNELS and can manage up to 384 remote I/O channels connected via the CAN network. It features 512 timer and 235 counter functions. The CANopen version supports the CiA 301 application layer (version 4.1). In addition, the supplier provides a CANopen Lift (CiA 417 version 2.0) implementation. The CANopen-PLC also supports communication function blocks as described in CiA 405. The host controller features 80 TPDO plus 80 RPDO. The CANopen-Lift version supports additionally the transmission and reception of MPDOs. An MPDO transports one single process data with a maximum length of 4 byte; the 24-bit address (index and sub-index) of the process data in the object dictionary is part of the MPDO. The CANopen connectable PC is equipped with LEDs (run and error) as specified in CiA 303-3. The controller implements an LSS (layer setting services) master, which avoids setting of node-IDs manually.
The J1939-PLC is suitable for mobile machinery using diesel engines and other J1939 compatible equipment. The company also provides NMEA2000 support in order to communicate with marine navigation systems and other devices compliant to IEC 61162-3. The PLC can also be used with a CAN layer-2 interface.

CiA (CAN in Automation) has released version 2.1 of the CiA 417 CANopen application profile for lift...