Yokogawa (Japan) has announced an optional CANopen interface for its Stardom network-based control system. It comprises the autonomous FCN controllers and the VDS software. The NFLC121 CANopen module is supported by the Resource Configurator, which allows handling of CANopen data in the same way as with direct I/Os. 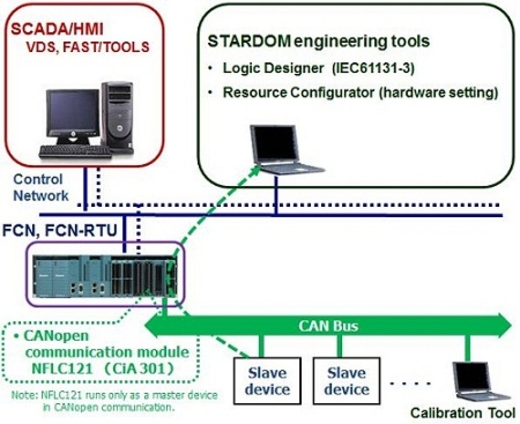 HE CANopen MODULE ELIMINATES THE NEED to use a gateway when connecting the host controllers with CANopen devices. The Japanese company also has introduced an IT security setting tool to assist in the configuration the same security models employed by the Centum VP integrated production control system. In addition, Microsoft Visual Studio support has been added for the creation of graphics for the VDS Scada control and monitoring software.
The host controller is used for equipment in small- to medium-size manufacturing plants, facilities that are distributed over a wide area such as oil/gas wells, and wind power generation systems. “As applications grow more varied, users need to connect with devices such as programmable controllers (PLCs) and motor control centers from other vendors that use different communication protocols,” stated Takashi Nishijima from Yokogawa.
The CANopen module is available for the FCN controller (up to four) as well as for the FCN-RTU controller (up to two). It provides NMT master functionality and can manage up to 126 CANopen NMT slave devices by means of SDO clients. Additionally, each module may handle up to 190 PDOs. Heartbeat producer and consumer functionality is supported as well as Emergency consumer capability. All in CiA 301 standardized bit-rates are possible. The 9-pin D-sub connector uses the CiA pin assignment. The interface module has no internal termination resistor.

CAN oscilloscope and recorder

The DL850V Vehicle Edition of the ScopeCorder by Yokogawa combines bus analyzing and message recordi...

Analyzing Classical CAN and CAN FD

Yokogawa Test and Measurement announced that it has developed the DLM3000 series of mixed signal osc...

Combining CAN data and voltage signals

The DL350 scopecorder by Yokogawa provides two module slots, which can be equipped with CAN decoder ...

Combining Sent and CAN modules

Yokogawa (Japan) has added additional trigger and analysis options to its DLM2000 (4-channel) and DL...