Solution for CANopen, Ethercat and Powerlink

The Econ 100 by Ixxat (Germany) is a universal ARM-based platform with a Linux operating system. It comes with two CAN ports and can act as a multi-channel CANopen controller.

FOR THE IMPLEMENTATION OF CANOPEN MASTER APPLICATIONS or Powerlink Managing Nodes, application development kits are available for the product. These kits include a board support package, the corresponding master software package which is pre-installed on an SD card, as well as the Linux operating system. For the enclosed sample applications, also a IO module is included in the scope of delivery, as well as a documentation, enabling the start of the development. Standard interfaces include two CAN interfaces, which are in accordance with ISO 11898-2 High-Speed, and galvanically isolated.

The CANopen master implementation is based on the CANopen master/slave software from Ixxat. It enables the product to act as a multi-channel CANopen controller. The device can be used with the CANopen software as multichannel-capable CANopen control. By combining EtherCAT master and CANopen master a combined, high-performance control for heterogeneous systems with EtherCAT and CANopen can be implemented. Operation areas of the product are customer-specific control applications and gateway solutions in which it is acting as master in one network and as slave within a superior network. 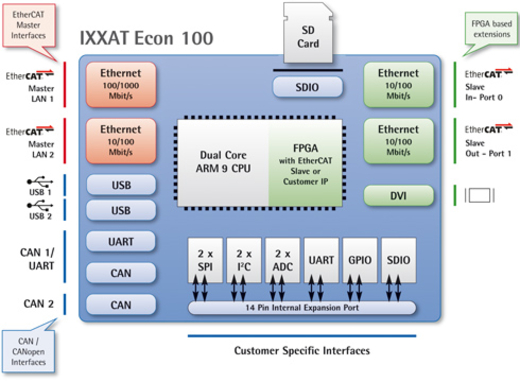 In addition to the interfaces of the base version, custom interfaces or enhancements (e.g. digital and analog IOs, DVI output) can be added via expansion slots and the integrated FPGA. The unit comes with a fanless design, and it extended temperature range is from -40 °C to + 60 °C. The used CPU is a dual core Cortex A9. The internal RAM memory has a standard size of 256 MiB and can be extended up to 1 GiB. The operating system and programs are stored in flash memory on an SD card. Besides the version within the metal housing, the company offers also a board-level product for space-saving integration into already existing customer applications. On request, they can also deliver OEM versions including hardware and software adaptations.

CAN repeater with anti-noise circuit

HMS Industrial Networks (Sweden) has acquired Ixxat Automation (Germany), which is a supplier of com...

Ixxat Automation (Germany) launched a software package for the development of CANopen applications u...

The CM CANopen from HMS Industrial Networks (Sweden) enables the Simatic S7-1200 PLC from Siemens to...

CAN interfaces ready for Windows 11