MRS Electronic (Germany) presented at Bauma 2013 its CAN I/O and CAN PLC modules, which are IP68-rated. They are programmable and configurable by means of the Developers Studio. 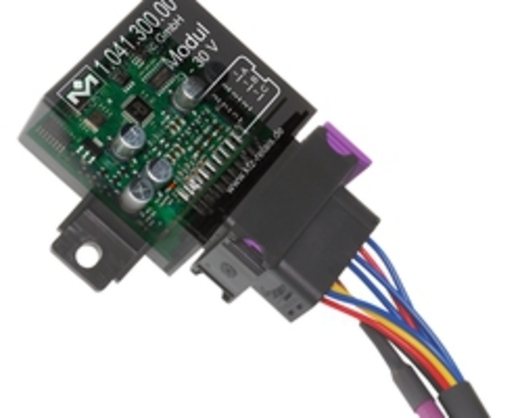 integrated in machines with limited space for electronics. The controller comes with CAN connectivity supporting different physical layers (ISO 11898-2/5 or ISO 11898-3). Application layer support is provided for CANopen and J1939. The devices features two digital inputs, six analog outputs, and eight analog inputs or digital outputs (PWM). Typical application examples include harvesting machines, tractors, snow groomers, and lifting platforms. A CAN loot-loader comes with the module that has an EiA-232 port.
The company also offers a similar module with more I/O connectivity, which is not IP68-rated. But it also offers CANopen and J1939 compatible interfaces. The IP65-rated M2600 CAN PLC comes in a 160 mm x 120 mm x 50 mm enclosure with 26 configurable I/O port. For applications with very limited space, the company manufactures the Micro PLC CAN measuring just 30 mm x 30 mm x 40 mm (IP53-rated) . It is equipped with up to three analog inputs. One of them can be substituted by a control output. In addition this module features two power outputs. The PLC supports CANopen as well as J1939. The Prop CAN module serves as a six-fold proportional amplifier (PWM outputs) and features one digital input as well as five analog outputs (2,5 A). The housing dimensions are 95 mm x 65 mm x 35 mm. J1939 support is available, CANopen on request. Last but not least, the company has developed a touch panel (155 mm x 96 mm x 24 mm). The implemented CAN interface supports low-power mode and wake-up capability. The panel has 10 capacitive buttons and features LED backlight as well as an acoustic feedback, when touching a button.

Wago (Germany) has released the PFC200 controller series based on a Linux real-time operating system...