Goepel Electronic (Germany) launched the CAN-to-LIN handheld terminal Smartcommander for automotive production applications. It allows the communication messages of non-available control units to be simulated on the CAN or LIN network, making it possible to carry out control functions required for assembly processes.

THE DEVICE FEATURES 24 CONFIGURABLE FUNCTION KEYS, which may be independently associated with message sequences or hierarchically interlinked with each other. This means that keys can be used to change message contents initiated by another key. The terminal may be connected to a host PC via its USB port to program and download the ECU functions to be simulated. This enables the device utilization as a gateway. Because the UUT (unit under test) may be remotely controlled from the PC, additional specific measurements or routines, which are not possible in stand-alone operations, may be executed.
In working areas such as vehicle assembly or the manufacture of mechatronic assemblies and systems there is often the problem that operating functions must be executed at units to be mounted in vehicles without availability of related ECUs and control elements. Examples for such applications are the installation of window lifter systems in vehicle doors, sunroofs for convertible models or electrically operated tailgates. An application example is the terminal’s utilization in functional test systems for car seats. Depending on the use case, basic functions such as on-seat heating and climatic equipment or comfort features such as lordosis may be checked. Hereby, the handheld unit supports the single control or utilization of all functions. 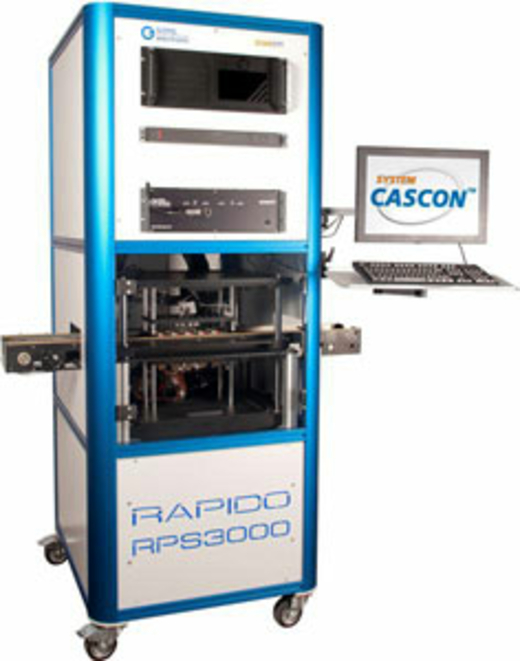 At Electronica 2012 trade show, the manufacturer launched the Rapido RPS3000 high-speed inline programming and embedded test system. The two introduced models enable probing of up to 3000 nails at 32 sites. Non-volatile memories such as Flash, micro-controllers (MCU) and programmable logic devices (PLD) may be on-board programmed. It is possible to combine programming tasks with test strategies such as boundary scan, processor emulation, chip embedded instruments or functional test. Core elements of the system are the System Cascon software and Scanflex hardware platforms. It also features various options for combination with functional board test up to 100 MHz, for customer-specific extensions, for programming via CAN, LIN or Flexray, as well as coupling with assembly magazines and pass/fail sorters.
The 200-employees company founded in 1991, is a vendor of automotive test solutions from bus communication up to functional test systems for vehicle control units. It runs service and support offices in the USA, UK, France, India and China.

And the OsCAR goes to …

Goepel Electronic introduced the OsCAR light test system for car seats. It may be used to test each ...

Test-system for network characteristics of ECUs

Goepel Electronic (Germany) has developed the Tessy series of test-systems dedicated for automotive ...

Headless developer kits for CAN

Range of interfaces including CAN

The Magic CAR³ by Goepel (Germany) is a modular test system architecture, which is modularly sc...

Two interfaces for CAN FD

With the PXI 6153 FD interface, Goepel Electronics offers a communication controller for CAN FD. In ...