Special car assistant based on CiA 447

At the iCC 2013, Dr. Martin Doering (Volkswagen R) presented in a keynote the concept of the special vehicle assistant. It includes a gateway compliant with the CiA 447 CANopen profile connecting after-market equipment. 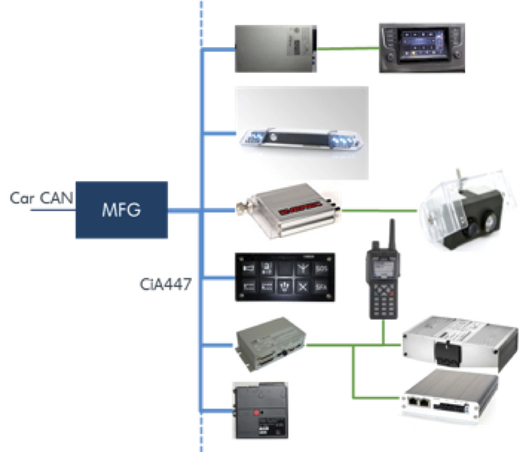 THE SPECIAL VEHICLE ASSISTANT IS INTENDED FOR police cars, ambulances, taxis, and cars for handicapped drivers. Dr. Martin Doering gave in his keynote speech some background information, why VW has adopted the CANopen gateway specification (CiA 447). He also discussed the possible use cases and the general concept of the assistant system.

The driver console features a touch panel and some hard-keys. The hard-keys are needed for immediate operation in police cars, e.g. to switch-on the blue-light. The policeman can't wait until the touch panel is booted. Volkswagen will provide the first cars equipped with the SFA special vehicle assistant beginning of next year. The German and the British police are involved in the development of the CiA 447 specifications.

CANopen for beginners and CiA 447 seminars

CAN in Automation, the international users’ and manufacturers’ group, organizes a CANopen semina...

Special purpose ECU based on CANopen

The Intelligent Vehicle System (IVS) based on CANopen is a special purpose designed ECU (Electronic ...

CAN FD transceiver with sleep mode and wake up function

European formula student teams can apply to Rohde & Schwarz before January 1, 2023 and borrow on...

CAN FD is set and CAN XL is coming