International Rectifier (USA) presented at the PCIM 2012 fair in Nuremberg its Evaira EMS (energy management system). The CAN-capable system is dedicated for heavy-duty battery applications. It is scalable for high cell-count battery packs as well as for high current applications in automotive and heavy industrial markets. 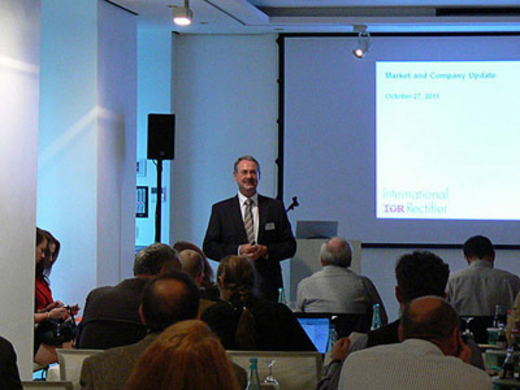 ACCORDING TO THE MANUFACTURER, the EMS supports systems up to 700 V with an unlimited number of modules. The device monitors the characteristics of each battery cell and adjusts its relative loading to match its capacity. The characteristics include SOC (state of charge) based on the voltage levels, discharge rates, pack SOH (state of health), expended current, and pack capacity. This information as well as the operating time is available on the integrated interfaces such as CAN, Ethernet and EIA-232. A CANopen-like protocol is used for communication on the CAN port. The system also logs parametric data to the integrated non-volatile memory. It is dedicated for data recording for up to 10 years. The recordings include environmental conditions, load demands, charging profiles, and charging cycles.
The company also presented the Slic (scalable lithium ion core) battery cell environment designed to reduce thermal and mechanical stresses on lithium polymer cells. The device is conductively cooled. The Evaira EMS is integrated into the system. The environment may be used as a stand-alone battery or as a battery module.
Also shown on the fair was the BXI drive from the Electric Engine series, which may be driven by a micro-controller with a CAN interface. It is offered for powers from 12 kW to 600 kW. International Rectifier is a power semiconductor provider and a supplier of power systems solutions such as e.g. power conversion components. The products are used in electronic and electrical equipment in automotive, consumer, computer peripherals, industrial, lighting, telecommunications and government space applications.

At the PCIM 2012 fair in Nuremberg Heiden Power (Germany) presented its TopCon power supplies with C...

Solar power does not have a long shelf life

Storing power is complicated and expensive, but often, especially far away from the regular power gr...