Displays and push-buttons for mobile machinery

The Argos product line by Graf-Syteco (Germany) includes several displays (MCQ-line) and push-button clusters (K- and AT-line). These products are designed for mobile machines used in agriculture and construction business. The product line comprises I/O modules (MCM-line as well as control units (P- and D-line). All devices are equipped with CAN interfaces. Optionally, the company provides software for J1939 and CANopen. 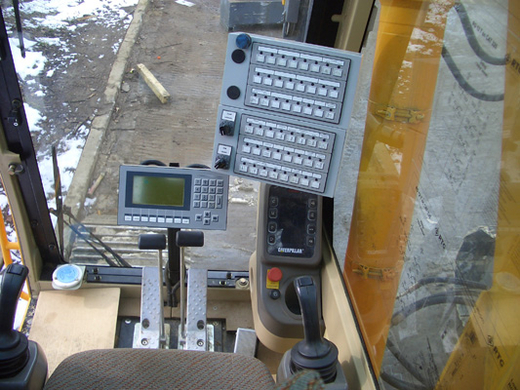 THE ARGOS D4160 IS A CONTROL UNIT with integrated Wide-VGA display. It is based on an ARM processor and features a TFT monitor (800 × 480 pixel). The device provides 14 function-keys; six of them are below the display. Besides two CAN interfaces, the IP65-rated unit has serial ports as well as USB. Ethernet, video interfaces. The supplier provides the GDS-Designer tool to generate application programs.
The Argos D1000 is control unit with touch-panel (96 mm × 96 mm). The four touch-keys provide status LEDs. The IP65-rated device will be available in the second quarter of 2012. It features a 64-MiB RAM, a 32-MiB flash memory, and an 8-KIB FRAM as well as up to 32 GiB mass memory. The Argos P1000 is similar, but comes without display. One of the implemented CAN interfaces is used for example for engine control (often based on J1939), and the second is responsible for body control purposes. The control software development is supported by the GDS-Designer tool using the GDS-logic o C programming languages.
The Argos K products are push-button cluster, which are individually configurable. The Argos AT14 is a display with six LEDs with configurable illumination. These products come with one CAN interface to be connected to the body network.
The German company was founded in 1982 and provides since several years CAN-connectable devices for agriculture and other mobile machinery. In China the company is represented by Pal-Fin.

Rugged multiturn encoder for use in mobile applications

Devices for off-road and off-highway vehicles

CAN is the dominating communication technology used in off-road and off-highway vehicles as well as ...

Epec has released version 2.0 of its Multitool software package. This PC utility tool supports the F...

Encoder and inclinometer for heavy-duty applications

In many outdoor applications such as harbor cranes, trucks, and construction machines CAN-based cont...