At the Innotrans 2012 in Berlin, Selectron Systems (Switzerland) will present the SIL-capable (safety integrity level) displays with CANopen connectivity. By programming, these allow to move hardware functions (e.g. tachometer) to the display.

OPERATING AND DISPLAY FUNCTIONS MAY BE DISPLAYED in one device. Also the detailed train diagnostic is possible via display. The touchscreen displays are available in sizes of 10,4 inch and 12,1 inch. Units with and without safety-relevant functions (local and decentralized) may be combined within one system and programmed with the same tool. Such communication interfaces as CANopen, Ethernet and optionally MVB (multifunction vehicle bus) are offered. Communication on safety-relevant networks (e.g. to SIL PLCs) is done via the so-named safety channels (with company's safety-channel protocol). Generic safety-relevant PLCs and SIL displays may be used in fail-safe applications with safe vehicle control, data collection, and operating including indication. Programming of such systems may be done with an IEC-61131-compatible tool. The displays may reduce safe and non-safe hardware components in the driver's panel as well as improve diagnosis. Safety-relevant controllers and displays in the complete system simplify the registration process on rail vehicles as well as driver's cab automation. 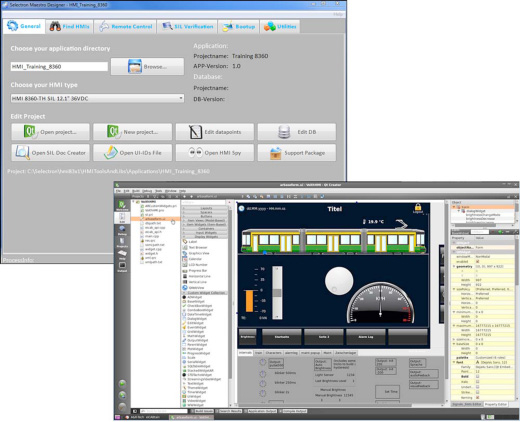 Less wiring (which causes less error potential) is required due to usage of one network cable for safe and non-safe protocols. As result, savings of wiring, engineering and certification process is achievable. For diagnostics of such combined systems company's tool Concerto may be used. For display screen design and configuration the Maestro Designer tool is provided by the manufacturer. The tool creates elements that are and are not safety-relevant on the touchscreen display in order to simplify control-relevant parts of the vehicle registration. Safety-relevant documents may be created automatically. A highlight here concerns the added widget for automatic topological representation of the hardware components used, which supports the user in commissioning and troubleshooting. The tool allows the commissioning personnel to test the installation, including its cabling. The software application does not have to be available at that point. Thus, it is possible to perform commissioning independently from an application allowing to complete a project sooner, thereby saving costs.

In December 2011, Selectron (Switzerland) organized a CANopen seminar in Beijing dedicated for rolli...