PCI-CAN card with eight CAN ports

Piso-CAN800U-D is a universal PCI-CAN card recently developed by ICP DAS (Taiwan). The standalone CAN controller board offers eight independent CAN communication ports with isolated protection.

THE DEVICE USES THE CAN CONTROLLER SJA1000T and the transceiver TJA1042 by NXP, which provide bus arbitration, error detection with auto correction and re-transmission function. It may be installed in a 3,3-V and 5-V PCI slot and supports the plug-and-play functionality. The 11-bit and 29-bit CAN-IDs (identifier) are supported. Bit-rates of up to 1 Mbit/s and direct memory mapping to the CAN controllers are possible. The 120-Ω termination resistor is put on each port. The board may be used in CAN networks with CANopen, DeviceNet, J1939 higher-layer protocols. Drivers for Windows 2000/XP/7, Labview, Dasylab and libraries for VB 6.0, VC++ 6.0, BCB 6.0, Delphi 4.0, C#.Net, VB.Net are supported. The device dimensions 193 mm x 22 mm x 93 mm and works at temperatures from 0 °C to +60 °C. Typical application fields include control systems, building and factory automation as well as distributed data acquisition. The company also develops CANopen products for harsh environments including PCI boards, gateways, I/O modules (support CiA 401 device profile for I/Os) and CANopen NMT master expansion modules for manufacturer’s PAC controllers. 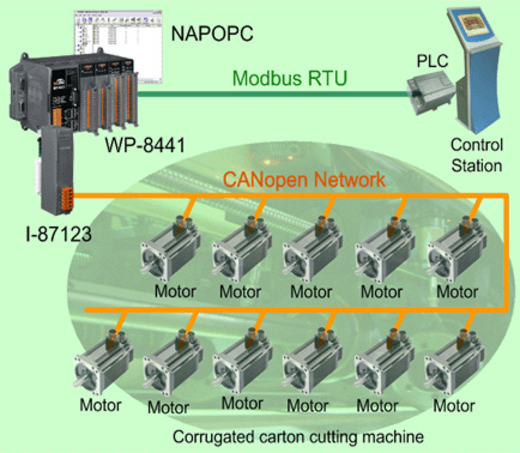 In an application example of the corrugated carton cutting system, the cutting knives and rollers are controlled by 31 CANopen motors. The company’s WP-8441 (PAC) controller and the I-87123 CANopen NMT master module control the motors synchronization and speed via CANopen. The motors may be commanded to the target position at the same time using one message from the master. In a magnetic resonance imaging (MRI) cooling system manufacturer’s CANopen-to-Modbus-RTU gateway is used to bypass the information of a chiller to the CANopen NMT master, and to transfer the CANopen commands to the chiller.
ICP DAS also produces such devices for DeviceNet as USB-to-DeviceNet master converter, master expansion modules, boards and I/O modules. For the J1939 networks e.g. the J1939-to-Modbus-RTU gateway is supplied.

At the SPS IPC Drives 2012 trade show some manufacturers showed their solutions for interfacing avai...

IF cards for CANopen and DeviceNet

The CAN2USB module by 8devices (Lithonia) is used to connect PCs or equivalent hardware (e.g. notebo...

Monitoring, analyzing, and diagnosing CAN

The CAN-Logger200 from ICPDAS is equipped with two M12-designed CAN interfaces and an exchangeable S...