PCI/104-Express boards for CAN and LIN

Ixxat (Germany) completes its PCI-Express series with two variants based on the PCI/104-Express standard. The boards are designed for use in compact industrial computers and mobile systems. 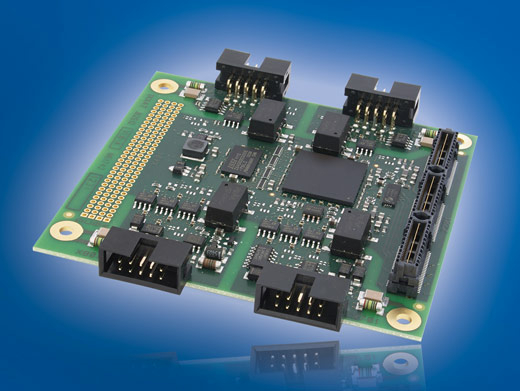 THE OFFERED BOARD VARIANTS ARE BASED on a modular architectural concept. In addition to a passive version for cost-sensitive applications, an active version with a 32-bit micro-controller is offered. The latter is designed for use in applications with high demands for data pre-processing. Depending on the version, the boards are available with up to four CAN interfaces as well as with an optional switchable high-/low speed CAN interface and LIN interface. All interfaces are galvanically isolated. In accordance with the requirements for industrial and mobile applications, the boards have an extended temperature range from -40 °C to +85 °C.
To connect the boards with the application running on a PC, the VCI (Virtual CAN Interface) Windows driver package is included in the scope of delivery. The driver supports all interfaces on the board and allows the use of both customer-specific programs as well as company’s analysis and configuration tools. Furthermore, the VCI driver supports all manufacturer’s CAN interface boards, enabling the user to switch between the different board variants without adaptation of its application. In addition, drivers for the real-time Windows extension RTX, Intime and Linux are available. The integration of the boards into networks using standardized higher-layer protocols may be performed using the CANopen NMT master API, the SAE J1939 API or further offered protocol software packages.

With the CAN-IB120/PCIe Mini, Ixxat (Germany) has extended its PCIe card series by a mini-format boa...

Palm-sized embedded board for video decoding and encoding

Habey (USA) released the EMB-4670 palm-sized embedded board with Intel's Atom E6xx processor and CAN...

PC/104-Plus board with four CAN channel

Peak-System (Germany) has launched the PCAN-PC/104-Plus Quad board, which features four independent ...

PC/104 board with two CAN channels

CAN FD for whole interface portfolio

Ixxat PC/CAN interfaces allow PC applications to access CAN networks with a variety of different PC ...