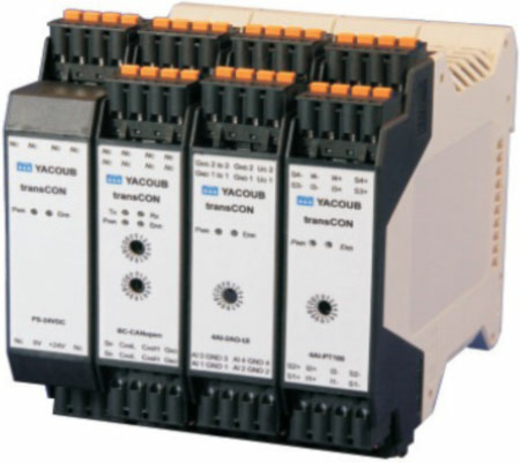 THE CAN NODE-ID AND THE BIT-RATE OF THE BUSCOUPLER may be set via a rotary switch. Supported are bit-rates from 10 kbit/s to 1 Mbit/s. The device featuring the 80C167 CPU by Siemens, implements the CiA 401 CANopen profile for I/O modules. The CAN connections are electrically isolated. Up to 15 modules may be connected via one bus coupler. The device requiring 24-VDC power supply consumes 0,15 A without I/O modules. It may operate at ambient temperatures from -40 °C to +70 °C. Diagnostics via the CANopen network is possible. The CANopen PLC includes the 66-MHz MPC 823e (industrial) CPU with a 16-MiB SDRAM and a 4-MB Flash. CANopen-related features (supported profile, node-ID and bit-rate setting) are the same as for the bus coupler.
The device provides Ethernet and EIA-232 interfaces as well. The PLC may be programmed with IEC-61131-compatible tools as Codesys and Multiprog. As a PC-implementation usable in railway applications, it may be programmed in C or C++ languages. Supported operating systems are Linux, VxWorks, Windows CE, PSOS, QNX, eCos and RT-Linux. Connection of a visualization device (HMI) on the PLC is possible.
The system complies with the EN 50155 and the EN 50121-3-2 standards. Areas of application are the large-capacity and public vehicles such as track vehicles, construction vehicles (excavators, cranes), special-purpose vehicles (fire engines, dustbin carts), buses, ships etc. Typical applications in vehicles include management of cabin information, control of drive mechanism, engine management, door control, control of air conditioning systems, brake control as well as passenger information. The system is also used for connection to the vehicle and train networks.

PLC with CANopen or J1939 connectivity

Bachmann Electronic (Austria) presented the DA3284-C CAN I/O module. It is a CANopen-capable compact...