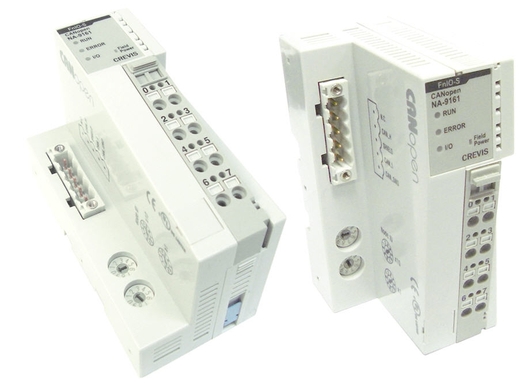 THE NA9161 CANOPEN BUS-COUPLER SUPPORTS all CiA 301 bit-rates up to 1 Mbit/s. The module also provides an automatic bit-rate detection mode. It provides 8 TPDOs and 8 RPDOs as well as the default SDO server functionality. The PDOs can be configured as asynchronous or synchronous messages. TPDO may be remotely requested. However, CiA recommends not use Remote Frames. The bus-coupler can handle up to 32 I/O extension modules. The range of I/O modules include digital inputs and outputs as well as analog inputs and outputs. In addition, there are special function modules available, e.g. counter.

The node-ID of the bus-coupler is selectable in the range from 1 to 99. The device comes with several LEDs indicating for example the CAN run and error states as well as the internal bus status. Besides the above-mentioned SDO and PDO functions, the product supports the EMCY message and Heartbeat as well as Node-guarding.

For the FnIO series produced in South Korea, Wachendorff offers a manufacturer-typical service and support. The products are already designed-in in different applications, including cranes, forklifts, and driverless transport systems. The German company's sisters produce also CANopen products such as HMI, encoders, and gateways, which are connectable to the I/O devices. The company also offers a starter-kit for the I/O devices comprising a bus-coupler plus four I/O modules and the necessary PC software for configuration.

Diagnostics of CAN, CANopen, J1939 or DeviceNet networks

The HD67316 analyzer series with PC interface from Wachendorff allows connection of a PC for diagnos...

At the SPS/IPC/Drives exhibition in Parma (Italy) EFA Automazione presented the I/O devices from Cre...

The TB20 I/O system by Systeme Helmholz (Germany) is an open-ended, modular, and distributed periphe...

The GP controller (GPC) by SVAB Hydraulik (Sweden) is designed for analog and digital inputs/outputs...

Wachendorff Automation, CAN in Automation (CiA) member since 2015, now has a heavy-duty variant in t...