At the SPS/IPC/Drives exhibition in Parma (Italy) EFA Automazione presented the I/O devices from Crevis (South Korea). The modular FnIO-S series features DeviceNet and CANopen adapter modules. The compact FNIO-A family is not available with CANopen interfaces as well as the FnIO-C connector type bus-coupler.

THE I/O PRODUCTS BY THE 1999 ESTABLISHED COMPANY looks similar than the products from Wago and Beckhoff. The Korean company ODVA member since 2001 has developed three I/O families for DeviceNet. The FnIO-S modular device comprises the NA-9111 DeviceNet adapter and the desired I/O modules. There is also the NA-9161 CANopen adapter available. Both CAN-based interface are accessible by means of a 5-pin open-style connector. They are able to run all defined DeviceNet and CANopen bit-rates.
The CANopen interface supports up to eight TPDOs and up to eight RPDOs. The network adapter and the expansion module can be represented as a parameter on PC by using the configuration tool software provided by the host controller. The company offers a broad range of I/O expansion modules with digital or analog Inputs and outputs. Additional, there are special modules with counter, converter (EIA-232, EIA-485, etc.), and power supply functions. Recently, the company has introduced master/slave extension modules. 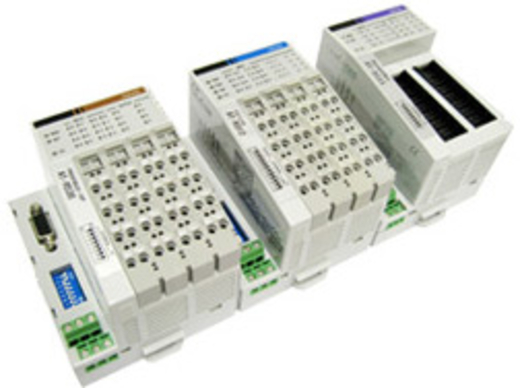 The FnIO-A series is compact devices limited features a fixed number of ten I/O modules. The AT2-R1xx DeviceNet coupler has the same features as the NA-9111 adapter. The compact version requires less space for the same number of I/O functions as the FnIO-S family. For DeviceNet, the Korean company offers also the FnIO-C connector type bus-coupler. The DIN-rail mountable device provides digital input or output functions: 32 for sink-type I/Os and 16 for source-type I/Os.
In Italy, the products are available from EFA Automazione. The company also represents Hilscher (Germany) with a network interface chips and boards as well as gateways. Beijer Electronics sells the I/O families in Sweden.

The second SPS/IPC/Drives Italia with about 300 exhibitors was well visited. The exhibitors were als...

ADFweb (Italy) presented at the SPS/IPC/Drives exhibition in Parma its gateways, bridges, and repeat...