Festo (Germany) has released the CTEU module connecting VTUB and VTUG valve terminals to CANopen or DeviceNet networks. Due to its diagnostics functions, the bus coupler reduces downtime and machine failure, for example by identifying overvoltage and short-circuits. 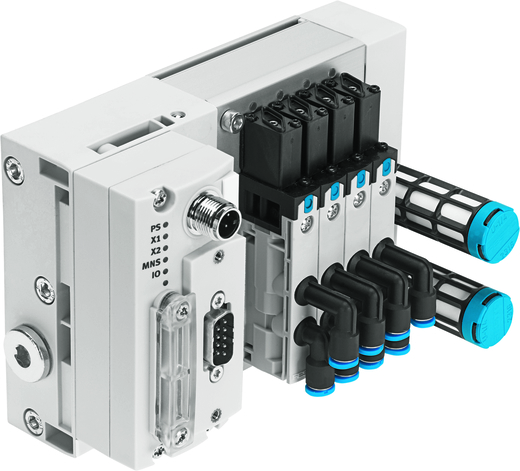 "EXISTING SOLUTIONS FOR INSTALLATIONS with multi-pin plug connection or individual wiring can be replaced in a cost-neutral fashion,” claims the providing company, “and thus enable customer applications to be adapted quickly and easily to new requirements.” A side effect is that changing from multi-pin connection to CAN-based networks significantly reduces installation and engineering costs. The products are suitable as belt tightener.

The CANopen and DevcieNet communications interfaces for the valve terminals are based on Festo’s I-Port, which functions as a universal M12 connector.
The I-Port can be flexibly equipped with the bus modules. Up to 64 valves are addressable by the 24-V powered bus modules. The CAN interface is realized as open-style (5 pin), micro-style (5-pin) or Dsub connector (9-pin).

Keys and lamps for CAN networks

In some commercial vehicles, there are keys and lamps needed, which provide CAN connectivity. The HM...

EAO (Germany) offers for its switches, pushbuttons, displays, touch-screens, and keypads a CANopen i...

Bionic robot arm with CAN

At the fair, Festo presents its Bioniccobot based on the human arm not only in terms of its anatomic...

With I/Os and drive interface

The CMGA from Festo (Germany) is a safety system with the option of integrated drive monitoring for ...

H-gantry: No larger than a sheet of DIN A4 paper

Festo (Germany) offers H-gantries, which provide CANopen connectivity to command up to 250 positions...

H-gantry for integration into CANopen networks

Festo (Germany) offers the EXCM planar surface gantry to be directly installed on machines. It is sp...