Analog Devices (USA) has launched the ADSP-CM40x series, a mixed-signal control processor that integrates the industry’s only embedded dual 16-bit A/D converter with up to 14 bits of accuracy together with a 240-MHz floating-point ARM Cortex-M4 processor core. These processors are intended for industrial motor and solar inverter designs. 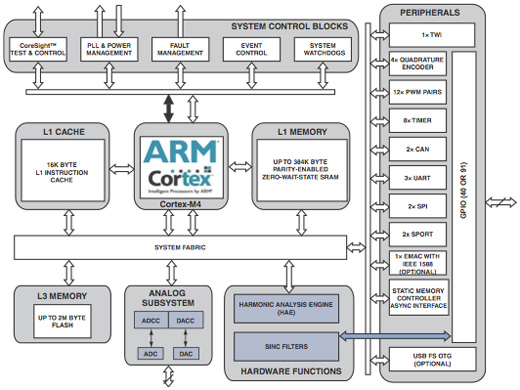 THE SERIES IS THE FIRST OF A GENERATION of mixed-signal control processors being developed by the company for precision control applications. In addition to its analog conversion performance and 380-ns conversion speeds, the series provides a number of other features such as a full sinc filter implementation to interface directly to isolated sigma-delta modulators (AD7400A/AD7401A) which are used in shunt-based current sensing system architectures. The availability of an on-chip sinc filter eliminates the cost and engineering resources required to implement that function in an FPGA.

Increased measurement accuracy, supported by the processor’s integrated high precision converters, is driven by ever more stringent grid compliance requirements. This, coupled with faster power control loops, fueled by the emergence of GaN (gallium nitride) and SiC (silicon carbide) power switching technologies, endeavors to assist with performance and cost improvements in the next generation of solar PV inverter topologies. The processor facilitates this through its 240-MHz floating point processing capabilities and analog conversion speed. 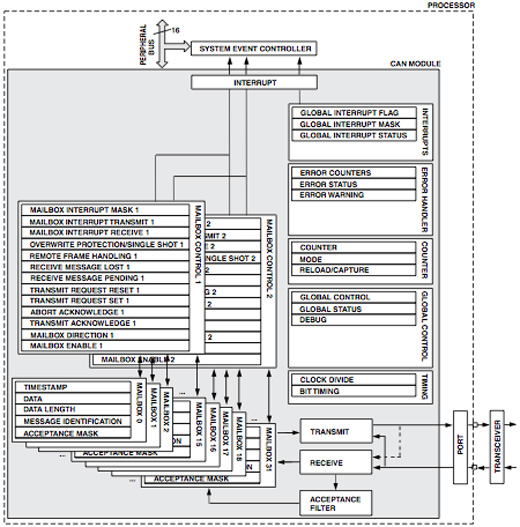 The processor includes a CAN module. The CAN protocol incorporates CRC checking, message error tracking, and fault node confinement. Additionally the CAN module offers 32 message buffers, which are called mailboxes (8 receive only, 8 transmit only, 16 configurable for receive or transmit), dedicated acceptance masks for each mailbox, and additional data filtering on the first two bytes, which can be used for acceptance filtering (Devicenet mode). Support for both the base (11-bit) and extended (29-bit) identifier (ID) message formats is given, as well as support for remote frames and active or passive network support. It also features CAN wakeup from hibernation mode (lowest static power consumption mode). A separate oscillator is not required to supply the CAN clock, as the CAN clock is derived from a system clock through a programmable divider.

Through the use of Mathworks’ ARM Cortex-M optimized Embedded Coder and tool suites, the company enhances system development by bringing designs from simulation to productized code implementation in an embedded platform.

The product is aimed at equipment manufacturers who require accurate, closed-loop control in servo or motor drives, solar photovoltaic (PV) inverters and other embedded industrial applications to improve the energy efficiency and performance of their products. Forty percent of the world’s electric power is consumed by electric motors, and demand for higher levels of factory automation is driving the need for greater industrial-motor power efficiency and performance. In addition, solar PV has become the largest source of new generation capacity added to the global electricity grid - with a cumulative installation base of 100 GW - and is set to become the fastest growing source of renewable energy generation over the next decade.

PCIe chip with CAN module

Microsemi (USA) has announced PCIe implementations based on FPGAs. The products, which are compliant...

Renesas (Japan) has released the RL78/F13 and RL78/F14 micro-controller families. These chips are su...