Microsemi (USA) has integrated Inicore’s (USA) CANmodule-IIIx into an FPGA together with an ARM Cortex-M3 processor. This Smartfusion2 named FPGA has been released recently. Besides CAN connectivity, it provides Gigabit-Ethernet and USB ports. 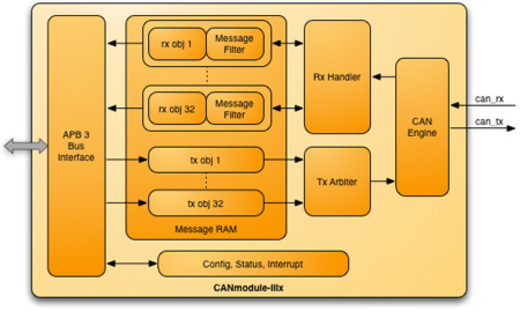 THE SMARTFUSION2 IMPLEMENTS THE CANmodule-IIIx core, which is a message object based CAN module. It is compliant with the ISO 11898-1 international standard and passed conformance testing according to ISO 16845. The core contains 32 receive buffers, each one with its own message filter, and 32 transmit buffers with prioritized arbitration scheme. For optimal support of higher-layer protocols (HLP) the message filter covers the first two data bytes as well.
The design is written in technology independent HDL and can be mapped to ASIC and FPGA architectures and makes use of on-chip SRAM structures.
An AMBA 3 Advanced Peripheral Bus (APB) interface enables smooth integration into ARM based SoC’s (system on chip). This synchronous bus interface can be connected to other system buses.
Both company have jointly enhanced the CANmodule-IIIx by adding single-bit error correction and double-bit error detection to the transmit and receive message buffers. This improves the CAN reliability for safety-critical applications that require IEC 61508, DO-254 or AEC-Q100 certifications. “As the only FPGA with SEU-immune zero FIT flash FPGA configuration cells, SmartFusion2 was designed specifically for safety-critical and mission-critical applications,” said Paul Ekas working with Microsemi. “Our customers have been using Inicore‘s ISO 11898-1 compliant cores in our devices and systems successfully for many years, and we were pleased to see the integration of the CANmodule-IIIx controller into SmartFusion2 SoC FPGAs achieved seamlessly with first-pass silicon success.”
“The feature-rich SmartFusion2 SoC FPGA with the integrated CAN controller provides a great platform to create embedded systems, particularly for applications where reliability is a top priority,” noted Inicore’s Daniel Leu. “We are pleased to continue our longstanding relationship with Microsemi and serve our common customers.”

At the Embedded World exhibition in Nuremberg (Germany) Bosch demonstrated a running CAN FD network....

The open-source can4linux project has finished it's work on the first available Linux CAN driver for...

32-bit µC evaluation board with FPGA

Silica (Germany) has introduced the Xynergy module combing a Cortex-M3 based STM32F217 micro-control...

At the 13th iCC (international CAN Conference), Linux software support for CAN networking was discus...

Motor control solution enhanced with CAN

Microsemi, a provider of semiconductor solutions, announced extensions to its Smart Fusion 2 system-...

PCIe chip with CAN module

Microsemi (USA) has announced PCIe implementations based on FPGAs. The products, which are compliant...