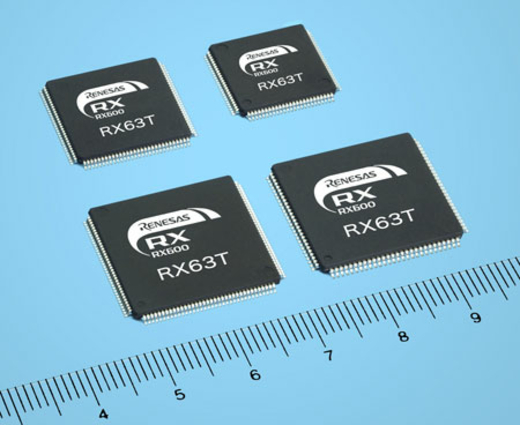 INTRODUCED MCUs HAVE HIGHER PIN COUNTS and larger memory versions. Further expanded functions include USB 2.0, a 10-bit D/A converter, a faster ADC (conversion time of 0,5 µs), as well as an increased number of timer channels and serial interfaces. Incorporated safety features (e.g. watchdog with on-chip clock source) allow to meet safety standards such as IEC 60730. The micro-controller platform is built around the 100-MHz 32-bit RX CPU core with zero-wait-state flash to achieve a 165 DMIPS performance and a 312 Coremark score. The devices provide a 256-KiB to 512-KiB Flash with up to 48 KiB of embedded SRAM. They also include 32 KiB of data Flash memory.
The MCUs include a floating-point unit and DSP functionality for the computation required to implement sensor-less vector control and motor control algorithms. Available multi-function timer pulse unit 3 that can drive up to two 3-phase motors. The 16-bit general-purpose PWM timer (GPT) is capable of driving a 3-phase motor and can independently control four channels of a single-phase inverter. The MCUs feature two 12-bit A/D converter units, which can capture analog input values with a minimum conversion time of 1 µs. The converters can be used for sensor-less vector control methods, such as three-shunt or single-shunt current detection.
The introduced group adds 48 products, resulting in 54 products for the RX63T group in total. The MCUs come with tools and software systems for hardware design and software development. The products will be offered in 100-pin, 112-pin, 120-pin, and 144-pin LQFP packages. Samples will be available from the end of November 2012. Mass production is scheduled to begin at the end of May 2013.

Automotive MCUs with up to seven CAN channels

Renesas has introduced RX631 micro-controllers in 48- and 64-pin packages. Some of them provide on-c...

Low-power MCUs with on-chip CAN modules