TKE (Finland) has released the XY-CAN-E inclinometer. It can be used for measuring the tilt and the swing angle of objects with respect to gravity. The device comes in an IP67-rated enclosure. 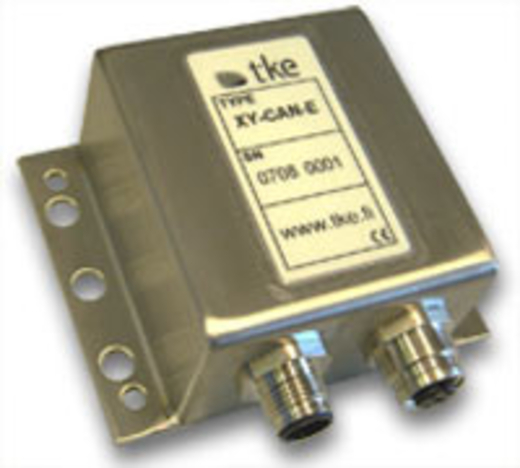 THE TWO-AXIS INCLINOMETER with an 180-° measuring range supports the CANopen protocol and is compliant to the CiA 410 device profile. It can also simultaneously operate as a 360° sensor. Inclination measuring is based on the accelerometer IC featuring a resolution up to 0,04 °. The accuracy is better than ±0,3 °, typically below ±0,15 °. The measurement is temperature compensated.
The CAN interface allows data-rates up to 1 Mbit/s. It supports the CiA 305 Layer Setting Services (LSS) for configuring bit-rate and node-ID. This avoids additional configuration interfaces or additional parts such as DIP-switches. The bus-lines are connected via the two M12 connectors (CAN-in and CAN-out).
The 330-g sensor operates in the temperature range from -35 °C to +70 °C. The IP67-rated housing is made from acid proof steel and the electronics is encapsulated in a durable epoxy. According to the Finish company, the device is nearly immune against vibration.

Posital (Germany) has introduced heavy-duty inclinometer versions with a CANopen interface and an in...

Inclinometers made in China

Inclinometers are used often in constructions machines as well as sun-tracking photovoltaic systems ...

CAN modules for mobile machines

CiA member Palfin (China) has developed several modules for mobile machines, some of them in close c...

Temperature data provided to the engine control system over J1939