With a monitoring range of 360°, the single-axis inclinometer by Turck (USA and Germany) provides extended application flexibility, allowing operators to monitor mechanical arms, such as tensioners or moving machine parts. The sensor features CANopen connectivity. 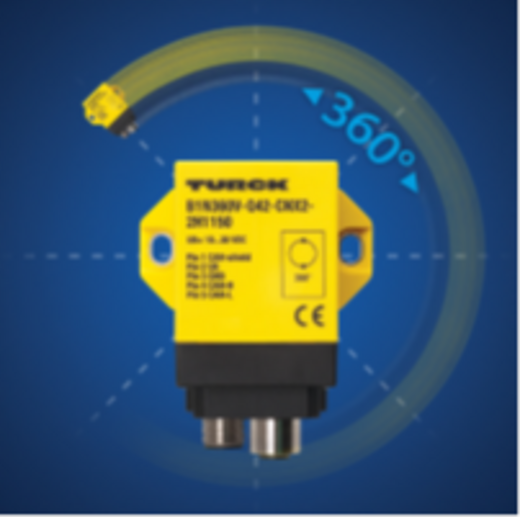 THE RECENTLY INTRODUCED ROTARY SINGLE-AXIS INCLINOMETER, expand the dual-axis CANopen inclinometer dedicated for angular tilt detection. The CANopen communication makes them usable for mobile equipment, such as monitoring and reporting position of outriggers, booms or other vertically rotating parts. The single-axis inclinometer measures angular tilt in reference to gravity. At the heart of the sensors are MEMS (micro-electro-mechanical system) components that incorporate capacitive elements into the sensor that utilize two parallel plate electrodes, one stationary and one attached to a spring-mass system. Movement causes acceleration that produces deflection in the non-stationary electrodes.
This results in a measurable change in the capacitance between the two plates that is proportional to the angle of deflection. All measured values and parameters are accessible via the CANopen object directory. The micro-board design in MEMS technology allows for a compact inclinometer in a robust IP68-rated housing.
“Employing technology from our proven dual-axis inclinometer, which monitors angles of up to 85 degrees in ether the x- or y-axis, the single-axis inclinometer extends the sensing capabilities to complete up to 360 degree rotational monitoring,” said Marty Cwach, Product Manager at Turck. “Now, our customers can satisfy virtually any application requiring 360 degrees monitoring.” The sensors operate in temperatures ranging from -40 °C to +70 °C.

The IS1D 00/90 P20/1 inclinometers by Gemac (Germany) are temperature compensated. They minimal temp...

Inclinometer in plastic or aluminum housing