The CAN/CANopen inclination sensors IS2S-090 and IS1S-360 that Gemac (Germany) will present at the SPS IPC Drives in Nuremberg, Germany are smaller and less expensive than previous solutions and stand up to interference immunity requirements. The sensors are available in a plastic housing with CAN and CANopen industry interfaces. 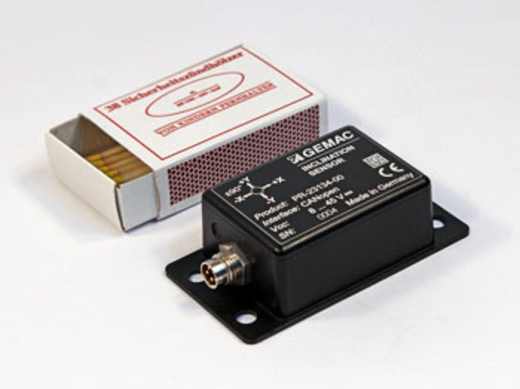 THE SENSORs FULFILL INTERNATIONAL PERFORMANCE STANDARDS such as EN ISO 14982 for agricultural and forestry machinery and EN 13309 for construction machinery. The two-dimensional inclinometer detects angles up to ±90° with a resolution of 0,01° and a representative accuracy of ±0,1°
(in a range up to 60°). With the one-dimensional type, up to 360° can be measured with a representative accuracy of ±0,15°. The operating temperature range is from -40 °C to +80°C. This sensors for one and two axes are the first in a cost- and space-saving series for mobile applications. They measures 68 mm x 36,3 mm x 20,7 mm and are thus almost two-thirds slimmer than their “big brother” from the 2011 generation of inclination sensors.

Gemac (Germany) launched the CAN-Bus Tester 2 (CBT2) diagnosis tool as a license model with a CANope...

The IS1D 00/90 P20/1 inclinometers by Gemac (Germany) are temperature compensated. They minimal temp...

Sauer-Danfoss (USA) has introduced the CSS1000 slope sensor, which supports the Plus+1 safety protoc...

Inclinometer with CAN interface

CAN measuring unit for mobile machines

CAN diagnostic for machine availability

Mobile machines are becoming ever more complex. A machine operating autonomously as much as possible...