ESD electronics provides an SAE J1939 protocol stack and software tools such as a J1939 monitor and device simulator. The German company with a daughter company in USA offers also a J1939 starter-kit. 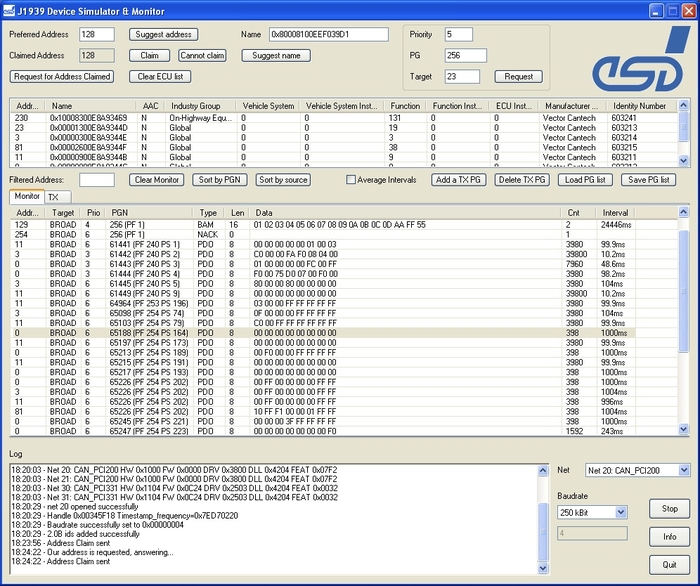 SAE J1939 HAS BECOME the accepted industry standard for in-vehicle networking in heavy-duty vehicles including off-highway machines such as construction, material handling, and forestry machines. The CAN messages exchanged between the networked electronic control units (ECU) can be data such as vehicle speed, torque control message from the transmission to the engine, oil temperature, and many more.
ESD, a founding member of the CAN in Automation (CiA) association, has developed a set of software tools to support the development, test, and simulation of J1939-based ECUs. The J1939 protocol is written in ANSI-C code. It features a high level of portability, and supports little- and big-endian micro-controllers. The software is adaptable to different target systems through the modification of #include and #define directives. An Application Programming Interface (API, Object Code) for Windows is available. It works in combination with all CAN hardware interfaces of the company, and it includes a J1939 simulation tool plus a J1939/CAN monitoring software.

The protocol stack includes some special features to accelerate the implementation task. The user does net need to care about BAM or RTS/CTS transport protocols, this is done automatically depending on data size and destination. Optionally, it is done by callback, to send even larger amount of data with a minimum of resource usage. The stack can automatically broadcast PGNs (parameter group number) in a given interval. Received PGNs are evaluated in a callback function regarding source and type (complete data, data chunk, interruption etc.). The filtering by PGN and/or source address is possible. It is also possible to use an extra callback function for Diagnostic Messages.

ESD (Germany) has extended its 402 series of CAN interface boards. The PCIeMini card features two CA...

ESD launched its CAN-USB/400, which is based on the company’s Advanced CAN core (ACC) implemen...

ESD (Germany) has added functionality to its free-of-charge CANreal monitoring tool. CAN messages an...

Ready for CAN FD

ESD (Germany) supports CAN FD, not just for the FPGA core esdACC and the application interface NTCAN...

The CANopen-PN by ESD (Germany) can link a Profinet-IO controller to a CANopen network. A maximum nu...