Port (Germany) has released the version 2.2.42 of its CANopen library. Existing customers can download the updated software. The company also provides CANopen tools including the CANopen Design Tool (CDT). 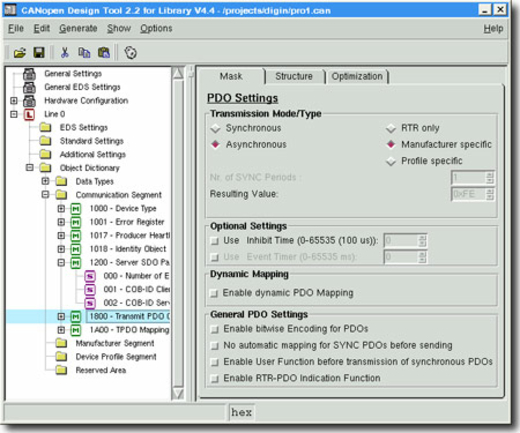 THE CANopen PROTOCOL STACK BY PORT is one of the most installed ones. Reference customers include Siemens and Volkswagen. Recently, the software provider has launched the next revision. It provides low-level driver software for Microchip’s PIC 32 family and for Freescale’s MC9508 micro-controllers with on-chip CAN module. In addition, the CSV import has been improved.
Beginning with version 2.0 of the CANopen library in 1998, several CAN networks (CAN lines) can be addressed. Thus it is possible to use more than one CAN interface in platforms without operating systems (OS) as well as in systems with single- or multi-tasking OS, even if there are only insufficient resource protection mechanisms. The CANopen library is compliant to CiA 301 and provides optionally functions specified in CiA 302 (additional application layer functions) and CiA 305 (layer setting services).
In particular, NMT flying master and network redundancy is supported as well as the CANopen-Safety protocols (EN 50325-5, formerly CiA 304). For the development of applications with the CANopen library the CDT tool can be used. It allows device databases to be generated and modified. These databases contain information about the device, which describes the interface to the CANopen network. For CANopen these values are stored in the CANopen object directory (OD). The function of CDT tool is to administer this data within the object directory database and to create from them an object dictionary code for the CANopen library. Furthermore an Electronics Data Sheet (EDS) is generated and all implemented objects can be made available as HTML or text file for documentation purposes.

The µC/CANopen protocol stack by Embedded Office is now available as a new version (V.3.0.2). An im...

CAN software framework and CANopen stack

Embedded Office established in 2003 offers a CAN software framework as well as a CANopen protocol st...

Emtas (Germany) is developing the CANopen DeviceDesigner tool. It will be available in autumn 2012. ...

Port has released an update for their CANopen Library, version 4.5p4. It supports additional hardwar...

The name Port is connected to industrial communication – for 25 years now. The company has bee...