With the CANopen Master API, Ixxat Automation offers a solution for development of PC-based CANopen control, test and service applications under Microsoft Windows. 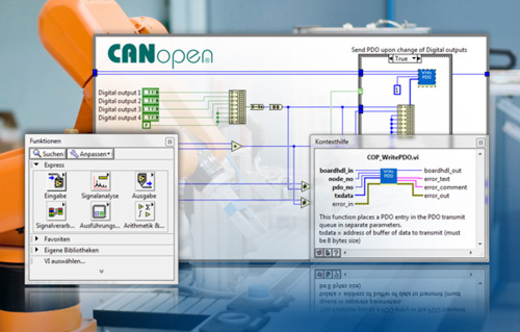 THE COMPANY ANNOUNCED THE UPDATED and expanded CANopen Master API V6. Along with the active CAN interfaces, the software supports company’s passive interfaces. The API can operate up to 12 CAN interfaces in parallel, and, depending on the used hardware, up to four CAN channels per interface board.

An additional feature of the recent CiA 301 specification is the extended CANopen Sync protocol with the defined Sync start value. Using this functionality, the system integrator may define a shifted sending of process data (PDOs) from different devices. This may avoid temporary message bursts during synchronous operation of large CANopen networks. CiA 305 includes the LSS Fastscan search and configuration protocol for the dynamic allocation of node-IDs for CANopen LSS slave devices.

Currently, the CANopen Master API programming library is offered for 32-bit and 64-bit Windows 2000, XP, Vista and Windows 7 systems. In addition to the DLL and a detailed user manual, numerous sample applications for C, C++, C#, Delphi, and VB.net are included with the delivery. Also included are examples enabling the integration of the API in Labview from National Instruments.

Open-source analyzer for CAN networks

Tiny-CAN View by MHS Elektronik (Germany) is the open-source (only for Linux) CAN analyzer usable on...

Data-logger with 12 CAN ports

The TTX data-logger by TTTech (Austria) is dedicated for recording of automotive ECU data. Besides C...

CAN FD for whole interface portfolio

Ixxat PC/CAN interfaces allow PC applications to access CAN networks with a variety of different PC ...