One software for all devices

Last year, Schneider Electric has introduced its control system strategy for OEM machine builders. In Qingdao (China), the French enterprise presented the MachineStruxure campaign to its Chinese customers: More than 400 OEMs participated in the two-days event, in which the control system strategy has been explained in detail. One important part of the strategy is CANopen. It is one of the supported network technologies. Except high-speed motion control applications, CANopen is the standard embedded network for PLCs, HMIs, I/O devices, frequency inverters, and servo drives.

INDEPENDENT OF THE CHOOSEN NETWORK TECHNOLOGY, the MachineStruxure compliant devices are all configured and programmed by the SoMachine software. The SoMachine software is based on IEC 61131-3 languages and implements the Codesys software. This single software solution uses the FDT/DTM device description technology, which reduces the complexity of device commissioning. With the offered tested, validated, and documented software function blocks, the OEM may save up to 50% of design and implementation time. The provided application function blocks are pre-programmed for generic and dedicated applications (packaging, hoisting, conveying, textile as well as lift and escalators). For the OEM, the CANopen network is embedded. This means, the software hides the CANopen details. Nevertheless, the experienced OEM may even optimize the CANopen communication by means of the provided tools, if desired. 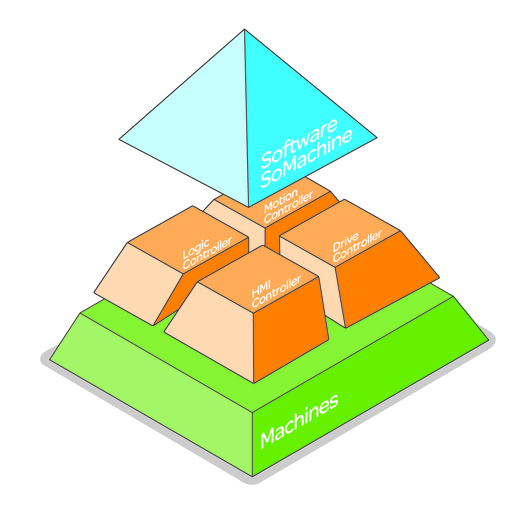 During the Qingdao presentation, Jintan Jinwang Packaging SCI-Tech specialized in chemical packaging machinery stated that they will go with the introduced control system strategy. They will use the MachineStruxure architecture in their automated packaging line, including bottle feeder, filling, capping, labeling, sealing, printing as well as Carton erecting, packing, and sealing machines. Also J. S. Machine, another Chinese OEM, has developed already machinery with Altivar 71 drives and is committed to the new one-software strategy for its corrugators. The MachineStruxure architecture is part of the EcoStruxure initiative. This energy management strategy is focused on energy saving, which also includes the optimization of control systems. Schneider Electric is organizing similar MachineStruxure events for OEM customers in September in Munich (Germany) and in November in Orlando, Florida (USA).

The ScanFish project develops a CAN monitor software running under Linux. The project just has been ...

Epec has released version 2.0 of its Multitool software package. This PC utility tool supports the F...

On the road: CANopen products travel through China

Schneider Electric (China) has equipped a truck with its industrial automation products and travels ...