The recently released version 4.0 of the CAN4Linux driver software supports the longer data fields as defined in the CAN FD protocol. The related open-source project was started already in 1997, its goal being to develop a generic CAN driver program, which is configurable for different CAN interfaces. 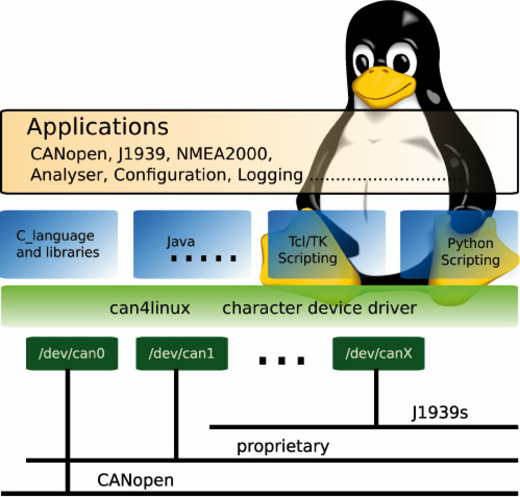 THERE IS CURRENTLY NO REAL HARDWARE AVAILABLE with implemented CAN FD capabilites. However, the Linux driver can be used in simulation mode implementing one or more virtual CAN networks. The driver still meets the requirements to be compatible with the ISO 11898-1 protocol. Apart from the larger payload (up to 64 byte), the only difference in the user interface is the 'canfd' flag used to differentiate the two formats.

In the last few years, the Linux driver has been used increasingly in embedded applications. The software design is suited for embedded applications because it reserves all used resources at compile time and run time. On a PC, where memory and processing resources are not a concern, the Linux software can be compiled to support as many networks and processes (CAN nodes) as one likes.

Developers can get a feeling for the CAN FD protocol by downloading the driver from the Sourceforge website. Examples showing the use of the CAN FD protocol are also provided. Initial ideas for the efficient use of CANopen were discussed at the 13th international CAN Conference. The CAN FD features will be of benefit to implementers of J1939 and other applications, too. In the fall of 2012, CAN FD will be submitted to the related ISO working group for international standardization.

The CAN4Linux driver software is mainly used in desktop computers. The development was based on the Linux Device Driver Kit (LDDK) by Claus Schroeter from the Linux Lab Project. Nowadays, Heinz-Jürgen Oertel manages this open-source project. The original version supported just the SJA1000 and 82527 stand-alone controllers. The newer versions are also usable for some micro-controller with integrated CAN modules (e.g. AT91SAM9263 by Atmel, MCP2515 by Microchip, Blackfin by Analog Devices, FlexCAN for Coldfire and i.MX by Freescale). The software driver supports several ISA and PCI interface boards.

The CAN FD (CAN with flexible data-rate) capable data structures and programming interfaces have bee...

Securing batteries for storage and transport

The adaptive 3‑Finger Gripper by Robotiq (Canada) picks up objects of any shape. It can be deliver...