Software for flashing ECUs over CAN

Vector (Germany) has released the version 2.5 of the vFlash. Which is the software for flashing ECUs. It enables simultaneous flashing of up to eight ECUs with the current edition of the vFlash Station. 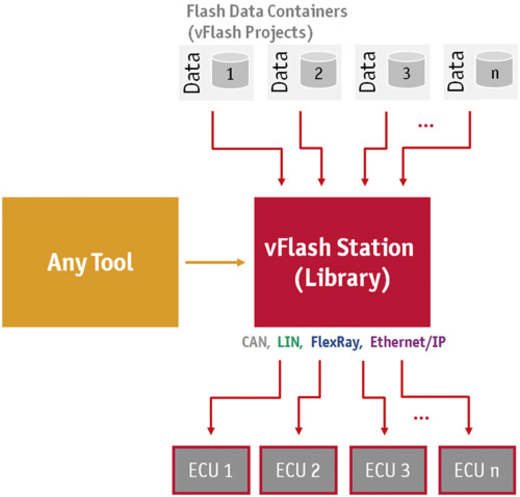 USERS WILL BENEFIT FROM LINKING THE vFlash Station library to their own applications via a API. This enables simultaneous flashing of up to eight ECUs each on a separate communication channel. It also supports fast flashing of ECUs over CAN, LIN, FlexRay and Ethernet (DoIP). In addition, the version 2.5 provides extensions for flashing FlexRay ECUs: To increase bandwidth, different logical connections are used for standard diagnostics and flashing. Flash performance over FlexRay was further improved. The software can be adapted to the flash methods and sequences of different automotive OEMs or bootloaders by using so-called vFlash templates. Currently, there are templates for around 40 different specifications. The software was designed for users at automotive OEMs and suppliers whose tasks include flashing ECUs. It may be used interactively or as a library.

Another feature is direct “native” programming of data in Intel hex, Motorola-S and binary format as well as flash programming based on ODX-F and flashing of compressed data. When vFlash interacts with Vector bus interfaces, such as the VN1611 interface, the user gets a complete environment for (re-) programming of ECUs: in the laboratory, at programming stations, in a laboratory vehicle or right at a test vehicle.

Vector (Germany) has released its CANalyzer 8.1 facilitates the CAN FD protocol. The tool also featu...

Flachmannn & Heggelbacher, an industrial software engineering company based in Germany, have release...

With Preevision 8.0, Vector supports electric/electronic architectures for vehicles. The release can...