Yokogawa (Japan) has enhanced its 8-channel mixed signal oscilloscope (MSO) with 16 extra channels of logic. Additionally, the firmware has been upgraded for power measurements and serial-bus testing including CAN. 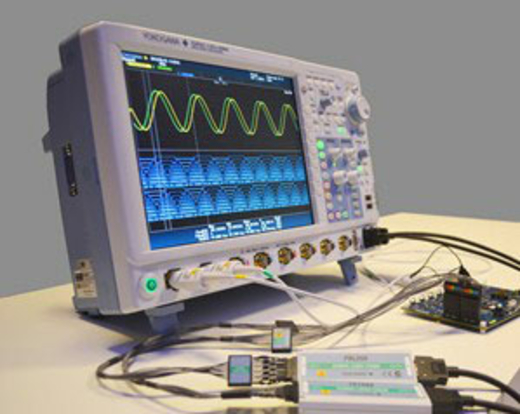 THE DLM4000, AN 8-CHANNEL MSO, launched at the end of last year, has been enhanced recently. The industry’s first 8-channel MSO combines the provider’s DL7480 oscilloscope with the DLM2000 mixed signal technology. The eight channels of the original instrument can be allocated as eight analog channels or seven analog channels, plus one 8-bit digital input. The introduced L16 option adds 16 more channels of logic to give seven channels of analog, plus 24-bit digital input, allowing a more detailed analysis of embedded electronics and serial-bus based systems.

Upgraded firmware on the /G4 option for power measurements gives the MSO enhanced power capabilities in line with the provider’s family of precision power analyzers. In particular, the oscilloscope can be used as a 3-phase power meter, with the eight channels allowing voltages and currents to be individually measured and displayed alongside derived values. With this option, the instrument offers automated measurement of power parameters for up to four pairs of voltage and current waveforms. These values can then be statistically processed and calculated to provide peak, average and root-mean-square values, along with many other parameters, such as power factor and q-factor.

On the /F1 to /F6 options for serial-bus testing, new firmware doubles the number of buses that can be simultaneously tested. It now becomes possible to test four CAN, LIN, or I2C buses, or two SPI buses, plus one other, such as a UART interface. Exploiting the 8-channel capability allows more combinations of buses to be tested, and adding the dual-zoom feature means that different buses can be viewed and debugged alongside one another.

The MSO series comprises of two models, with bandwidths of 350 MHz and 500 MHz and a sampling rate of 1,25 Giga-samples per second, expandable to 2,5 Giga-samples per second with interleaving. The instruments feature a memory for up to 125 M points, allowing both long recordings and multiple waveforms to be acquired. A history memory function allows up to 20000 previously captured waveforms to be saved in the acquisition memory, with any one or all of them displayed on screen for cursor measurements to be carried out. Waveforms can be displayed one at a time or in order, or automatically played back, paused, fast-forwarded or rewound.

The enhanced MSO is the latest addition to the range of oscilloscopes from Yokogawa, which also includes the compact DLM2000 series and the DL850 ScopeCorder. The latter combines the benefits of both a digital oscilloscope and a multi-channel data recorder.

Yokogawa (Japan) launched the DLM4000 eight-channel mixed-signal oscilloscope claiming to be the fir...