Oscilloscope analyzes CAN signals and frames

For several years, high-end oscilloscopes are able to analyze CAN signals and CAN frames. Agilent, Nicolet, Tektronix, Yokokawa, and others had introduced software extensions for their oscilloscopes. Recently, Hamlet has launched an entry-class oscilloscope with similar features. 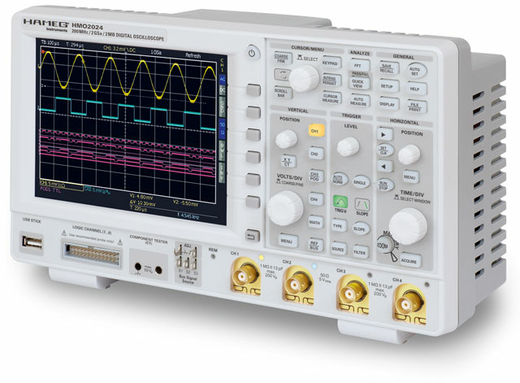 IN THE PHYSICAL LAYER, the validation of the electrical signals’ properties (such as amplitude and rise times) is performed. The CAN bits are transmitted as differential signals in order to achieve high immunity against interference. Therefore a differential probe should be used in order to analyze the CAN signals. Looking at the maximum data rate of 1 Mbit/s normally a 20-MHz probe would be sufficient. However, as is customary in today’s electronics, rise times of lower than 20 ns are very much standard in CAN systems. Consequently, for an analysis of the physical layer, band- widths of higher than 100 MHz are necessary. Hameg’s HZO40 probe fulfills this requirement: It is an active 200-MHz differential 10:1 probe. With its 3,5-pF input capacity and its 1-MOhm input resistance the load on the signal to be measured is as low as possible. In conjunction with the measuring features of the HMO series of oscilloscopes, a detailed test of the CAN physical layer is possible. It is the QuickView feature, available by pressing a button, which initiates the simultaneous measurement and display of eleven parameters within the signal and thus speeds checking the signal integrity by the user. Also the Pass/Fail test based on masks, provided as a standard feature, may be used for checking the signal integrity.
An essential task during development and debugging of CAN is the check of message telegrams received. Preferably, an oscilloscope is used in order to determine immediately whether the cause of a problem is in the hardware or software. The oscilloscope shows the user the decoded data as well as the physical signal, and only by this property it is possible to differentiate between hardware and software related faults. A pure protocol analyzer, which only looks at the data stream and displays it on the PC cannot serve this purpose. The HOO12 option allows design engineers and systems integrators to trigger on CAN messages and decode them. This options costs less than 500 US-$. The 5-ns rise-time should be taken in account, when testing the physical layer.
The bus display is color-coded in order to improve legibility. The CAN-ID is shown in magenta, the data-field in blue, the ACK-field in green (if dominant, if not acknowledge in red). This color-coding allows a quick survey even if many message telegrams are stored in the up to 4-Mega-messages deep capture-memory of the oscilloscope. Decoding is performed typically in hexadecimal format. It is also possible in ASCII, decimal and binary formats. The results may be enlarged vertically in order to display decoded values for many frames on the screen. Applications with several CAN nodes may exist, which requires analyzing two separate CAN signals. An example could be that a signal has to be looped through a CAN node, and the time delay has to be looked at. Therefore, the CAN option offers the simultaneous decoding of two CAN networks. It contains various trigger possibilities, in order to filter defined messages e.g. from a specific sensor, out of the CAN messages on the network. It is possible to specify a CAN-ID or a data value below or above a specific threshold or the combination of an CAN-ID and a certain data value. This ensures that the messages in which one is interested are extracted from the data stream for further analysis.

Along with the CAN protocol, the CANoe.CANaerospace 7.2 development and test tool from Vector suppor...

CANopen and J1939 are supported

STW (Germany) has released the SMX.igs-e sensor, which measures the inclination angle of an object i...

Made in China: 32-bit security MCU with CAN