Diga (Poland) developed the 3rd generation of its CANstudio software tool for configuration of CANopen devices and monitoring of the CAN network. The launched tool version is able to manage up to two separate CAN channels. 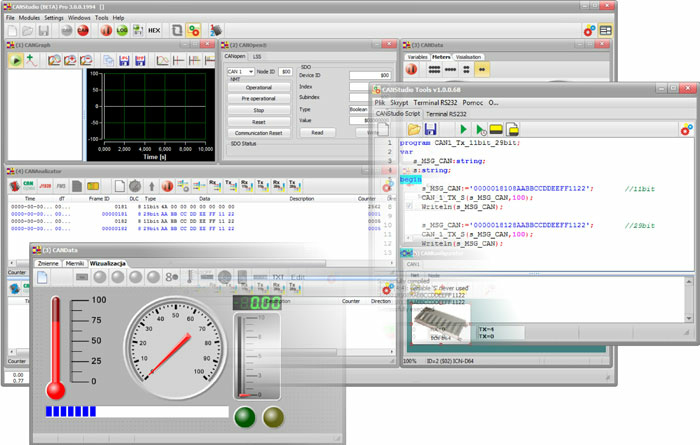 MAIN DATA ENGINE WAS REBUILT and is currently 50 % faster than in the version 2 of the tool. Further, a tab in CANdata module called Visualization was added. There, the user can build a customized gauge dashboard to present data from CAN messages and also include configurable push-button objects for CAN frames to be send. The style of meters was modernized in comparison to CANstudio 2. A module for details of CANopen and J1939 protocol interpretation is available in the CANanalizator window. CANgenerator module became more flexible and can operate in short-mode to reduce space on a PC screen. Introduced was also a module for user scripting called CANstudio Tools. Thus, the user can write own scripts in Pascal language. It is possible to send and receive CAN messages via the tool. The scripting module is equipped with an EIA-232 port, allowing using the PC serial port in user’s scripts. Data can be viewed in an internal terminal. It is possible to send and receive packages to and from the serial port. Thus, the user can write, for example, a software converter between CAN and EIA-232. It is helpful for development of a virtual converter. Additionally, it is possible to write some emulators e.g. for a CANopen NMT slave or an NMT master node. It is also possible to send more than 1000 CAN frames per second from the script. It is planed to implement C, Java and Basic languages for scripting in 2013. The tool can manage up to two company’s independent CRSUB v1 USB-to-CAN converters or one CRUSB v2 USB-to-CAN converter with two CAN ports. The latter will be available soon. A demo version of the introduced tool is available for download from provider’s web side.

For configuration of ECU...

CAN analyzing and config...