CAN tools for analyzing the CAN traffic, configuring devices and systems as well as for trouble-shooting are around for a while. This includes also oscilloscopes with a CAN protocol interpretation or CAN signal analyzing capability. They are all continuously improved by the providers. New versions come with additional nice-to-have features, but the overall function is often the same. The following tool update information provides an overview of recently introduced enhancements. 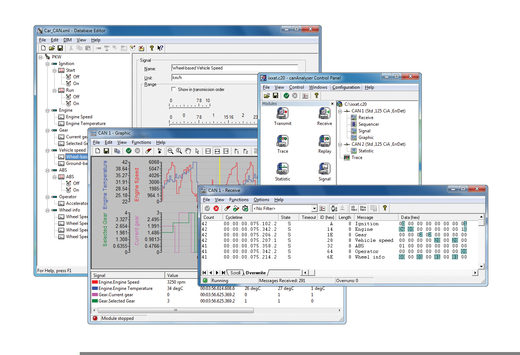 AUTEL INTELLIGNT TECHNOLOGY (China) has introduced for its Maxiscan MS300 series of diagnostic trouble code (DTC) reader CAN connectivity support. The tool interprets all DTCs for vehicles sold after 1996. The CAN support includes OBD II protocols. The tool can be update by means of free internet software downloaded via the USB interface.

Insys (Germany) has developed the TS CAN easy adapter linking in-vehicle networks to a PC by means of USB, Ethernet, or WLAN. The analyzing tool provides two trigger I/O lines, which are controlled by configurable bus-events. Besides data recording on the PC, the tool supports an optional logging function in the adapter hardware.

Ixxat (Germany) has launched the version 2.8 of its Cananalyser tool, which is suitable for CAN, CANopen, SAE J1939 and DeviceNet networks. It was extended in terms of usability and interaction with other tools. The product allows for the transfer of received messages from the receive module to the transmit module via “drag and drop” or to copy messages to the clipboard. The creation of transmit-lists and the further processing of received messages is thus accelerated and simplified. The ability to easily set reference time-stamps was implemented to measure reception times in relation to other messages. Customers already using version 2.7 can update to version 2.8 free-of-charge. Attractive update packages are available for those using older versions.

Jetter (Germany) has released the version 3.11 of its ISO Designer, a tool dedicated for ISO 11783 (Isobus) applications for agriculture and forestry machinery. The editor tool provides the user with functions employing object-oriented structures for the creation of screen masks. Once objects have been created they can be re-used in other masks. The masks created are saved as IOP files; IOP files created in third-party editors may also be imported into the tool. A demo version of the tool is downloaded.

Kvaser (Sweden) has agreed with Softing to accept the German software and service provider as a qualified reseller of its CAN hardware. Notably, Softing plans to offer a diagnostic solution package that combines an entry-level version of its DTS-Monaco software for ECU communication, diagnostics and onboard analysis with Kvaser’s Leaf Light CAN-to-USB interface. Explaining how the Swedish hardware complements the CAN hardware products, Peter Biermann, managing director of Softing Automotive Electronics said: “It is important for us to offer our customers exactly the solutions they are looking for. With the Leaf Light interface we can offer our customers a reasonably priced diagnostic solution that is lean and easy to use – as a ‘one stop’ provider.”

Melexis’ CanEasy 3.4 is a Windows-based analyzer for CAN and LIN networks. The product from Melexis (offered in Germany by Schleissheimer) is also able to simulate CAN traffic. The most important customer is Continental, a general supplier for carmakers. The development tool is also suitable for test purposes. It provides an important function for dbc and Idf files. For users not requiring such a high-sophisticated CAN tool, Schleissheimer offers the CanX On-Board software tool, which requires a CanEasy license. This software hides the complexity for not so experienced users.

Peak-System (Germany) offers its handheld device for CAN diagnostics as the reworked model PCAN-Diag 2. Besides hexadecimal and symbolic view of incoming CAN traffic, lists for transmitted CAN messages can be used. For more thorough CAN diagnostics the measurement of busload, termination, and voltage is available. Another analysis option is the display of CAN signals by the integrated 2-channel oscilloscope, where CAN-specific events (e.g. CAN-ID) are usable as trigger. Oscilloscope or busload views can be saved as screenshots. Further more, a recorded signal course can be exported to a CSV file containing all sample values. Another feature is the access via USB to the mass storage integrated in the PCAN-Diag 2. With the provided Windows software device settings, CAN transmit lists, and symbol files can be compiled to projects and transferred to the device.

Yokogawa (Japan) has released a vehicle edition of its DL850V Scopecorder waveform acquisition and recording instrument. The new version adds CAN monitoring function, making it usable to troubleshoot and debug in-vehicle networks.
Using the instrument, an engineer can decode the CAN signal and retrieve information on physical data like engine temperature, wheel speed and braking from the CAN signal and compare this with the data coming from real sensors. Compared to earlier versions, the instrument features higher-speed acquisition over a larger number of channels, and the ability to carry out real-time recording. With acquisition speeds up to 100 mega-samples per second, it achieves ten times the sample rate, display, and memory handling speeds as its predecessor.

Along with the CAN protocol, the CANoe.CANaerospace 7.2 development and test tool from Vector suppor...

CAN software framework and CANopen stack

Embedded Office established in 2003 offers a CAN software framework as well as a CANopen protocol st...

Interfaces Ethernet and CAN FD networks

Vector Informatik released the VN5620 network interface for automotive Ethernet and classical CAN as...