For planning, optimizing and verifying of embedded systems 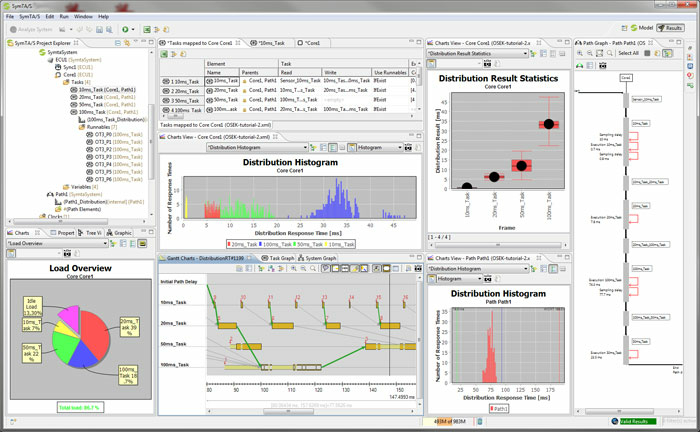 FOR CAN IT IS OFTEN REQUIRED TO DETECT DELAYS of safety-critical messages, which are generated through the competitive communication. By means of the tool it is possible to analyze such situations for further system design planning. Further, the dynamic behavior (sporadic messages) of the CAN networks may be considered and its impact on the busload and response time may be calculated. If certain system limits for safety-critical messages are overrun, the tool helps to optimize the communication matrix. Interpretation of the log files with the Traceanalyzer also allows determination of the dynamic communication characteristics, busload and message response times. The trace data may also be graphically represented as a Gantt chart allowing a “visual debugging” of the communication data, which is similar to the oscilloscope function. Analysis results may be took over to the Symta/S for further calculations.
The distribution analysis covers entire systems as well as individual CAN networks and gives users the ability to undertake typical case analysis where communication paths are non-safety critical. As an intermediate analytical step between load analysis and worst-case analysis, it provides further scalability to the timing design and timing verification capabilities. The version 3.2 supports Autosar 3.x and 4.x including feature enhancements. It extend former Autosar 3.x support capabilities with the inclusion of the Autosar-4.x XML import interface covering the same model and parameter sets as exist for Autosar 3.x. Such workflow improvements as import, export, scripting and report functionalities are now also available in Traceanalyzer. Furthermore, the tools are seamlessly integrated through a common data model and common Eclipse-based GUI, thus behaving as a single tool.
The tool suite helps engineers conquer design challenges for controllers, processors, networks and complete integrated systems. It is used in automotive electronics with support of CAN, Autosar, Flexray and Osek as well as in the avionics, automation, multimedia, telecommunications and transportation markets. The Symta/S tool supports also the timing design and verification of embedded software developed for the multi-core Aurix automotive micro-controllers from Infineon (Germany).
The company, headquartered in Braunschweig, provides embedded design software tools and services and is a founding member of the Real-Time Experts Alliance, which was formed in 2008 to provide complete solutions for timing challenges in real-time systems development.

Converts J1939 to CANopen and to Modbus RTU

Automotive data acquisition on 12 CAN ports